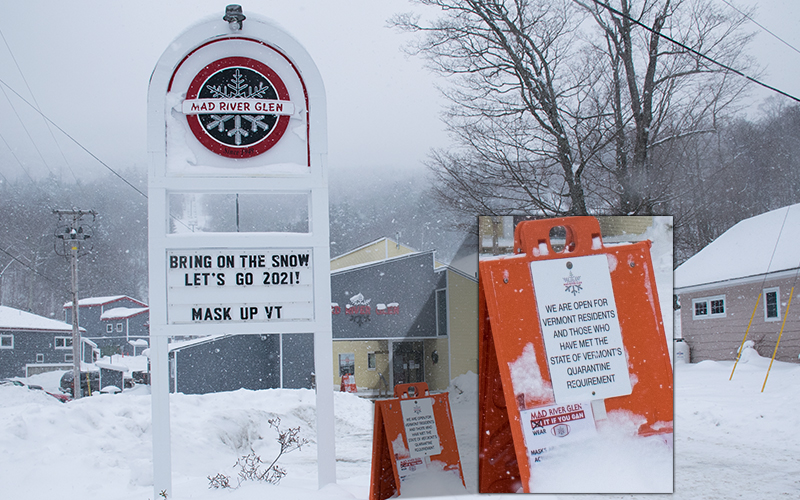 Saturday, January 23, was a bit cold and just a bit windy too. Around 9 a.m. the parking lot at Mad River Glen was about a third full, with ushers helping organize the cars. I pulled into a spot, as I looked up, I could see a few out-of-state license plates. My cold boots stung my fingers as I put them on.

Walking up to the entrance skiers are greeted by the words, “Bring on the snow, Let’s go 2021! Mask up VT” on the tall white sign with the Mad River logo at the very top. I made my way outside the ticket office. A small line formed as I waited for my ticket. The lift lines eventually lead to a small shack with an employee who scans tickets through a small gap in a window. I went for my first run on the Single Chair and got off at mid station. The good music playing at mid station got me even more excited to ski. I skied the tear-drop shaped moguls on Liftline first and then cut over to Upper Glade. 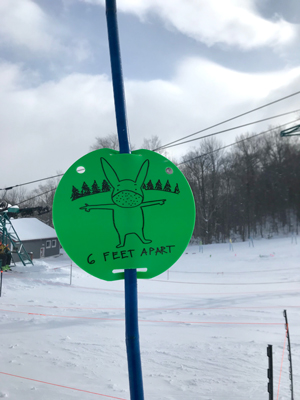 After my first run, I met with Ry Young, marketing and events manager for Mad River Glen. The warm lodge felt inviting, even with half the normal seating.

Our discussion ranged from the obvious changes around Mad River like the one-way traffic signs throughout the lodge and the limited capacity, to how being owned by a collective has been during Covid-19. “The co-op and the co-op board really believes in the management and what we’ve been doing here. Everybody here, employees, the guests, the shareholders, everybody has bought into this idea that we’re all in it together,” Young stated.

I kept skiing, and there wasn’t a run where I didn’t find fresh snow. Around 11:30 a.m. I decided to warm up in the base lodge. Before going upstairs, I saw Lila Montgomery, a former Harwood student from Warren.

“I've been skiing here since I was 3 years old and the warm welcoming culture has not faltered at all and the trails have been phenomenal. Hey, no better time for a single chair than when you have to be 6 feet from one another!” she said.

People can buy food inside the base lodge and get a seat at Stark's Pub or outside at the new Snack Shack. They have grab-and-go food as well as hot drinks.

When on the second floor, plexiglass has been hung between the booths and tables. Children were smiling and red-cheeked. The room was lively and happy, but people kept to their own booths. When I was going to go downstairs, I remembered that the main stairs were supposed to be one-way only. My eyes scanned the room and saw a second stairwell, marked exit. At first, I thought it might be an emergency exit, but then a little girl laughed at me and opened the door to the stairs. I followed her, now red-cheeked myself.

There was only one time when I saw someone without a mask on. When I was waiting to get on the Sunny Side Chair, I saw a man coming down the mountain with a bright red face. He put his mask on when I asked him too, and said, “Sorry.” He looked to be having so much fun that he forgot to put it back on when he got down to the lift.