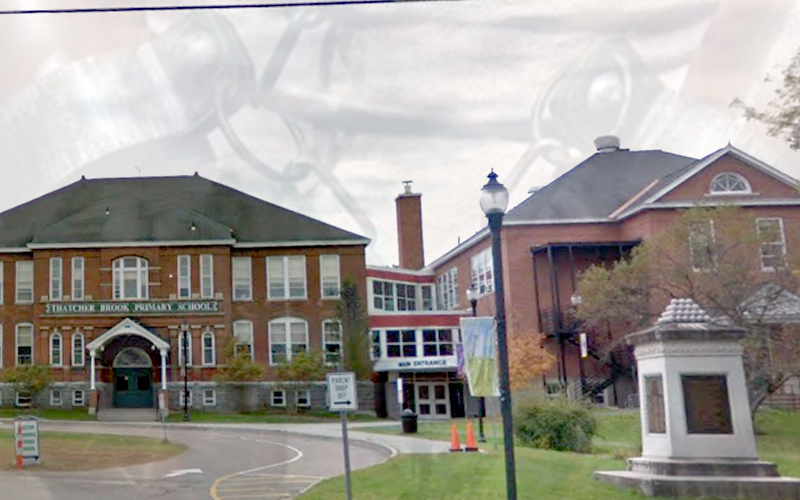 On February 10, the Harwood Unified Union School District (HUUSD) Board voted unanimously in support of changing the name of Thatcher Brook Primary School (TBMS). Specifically, the board voted to support changing the school’s name as a way to further the board’s mission of “creating a welcoming and inclusive environment.” Board members also pledged to pursue a name-changing process that will include community members and students in the search for a new name.

The TBMS name-change debate came to light in early January after the Waterbury Anti-Racism Coalition held a Zoom meeting that drew over 100 attendees. The purpose of the meeting was to urge the school board to rename the town’s primary school, which is currently named after a brook that derives its name from slaveholder Partridge Thatcher.

Thatcher’s relationship to the town of Waterbury, Vermont, started in 1763 when New Hampshire Governor Benning Wentworth chartered lands in central Vermont to several dozen people including Thatcher. In 1782, Thatcher went with a team to survey this land and ended up building a cabin on a stream in Waterbury that his team called “Thatcher Branch,” currently known as Thatcher Brook. After a less than a year in Vermont, Thatcher returned to Connecticut. He died in 1786.

As school board members contemplated this history at their meeting on February 10, they took turns voicing their approval of changing the school’s name. Vice chair Torrey Smith best encapsulated the board’s sentiments.

“I keep coming back to an analogy that feels valuable to me. This actually happened to me. I was pregnant in an old house sanding some walls down. And it turned out there was all this lead in the paint, because it was an old house and back in the 60s, there was lead in the paint. I thought about, can I just paint it over? But that wasn’t the right solution,” she started.

“The people who painted my house with lead weren’t trying to do the wrong thing. They were working within the standards of the time. Likewise, the people who named Thatcher Brook after a brook, they were looking to be inclusive. They were doing their best with the attitudes of the time,” said Smith. “But I think we can do better.”

Smith urged the board to recognize its power and to use it to promote equality. “I am, in this moment, a person of power. I see no reason not to share that power with more people. By that, I mean, I don’t need to wait for more people to pick at me to change the name. It just seems like the right thing to do. And it’s not going to hurt anybody. Changing the name does no damage, but it may do some good,” said Smith.

Finally, Smith left board members to ponder a powerful quote that she’d heard recently: “It’s up to us to be intrusive in places that aren’t inclusive.”

The school board will use the next few weeks to design a community focused name-changing plan. There is currently no specific timeline for solidifying the name change.