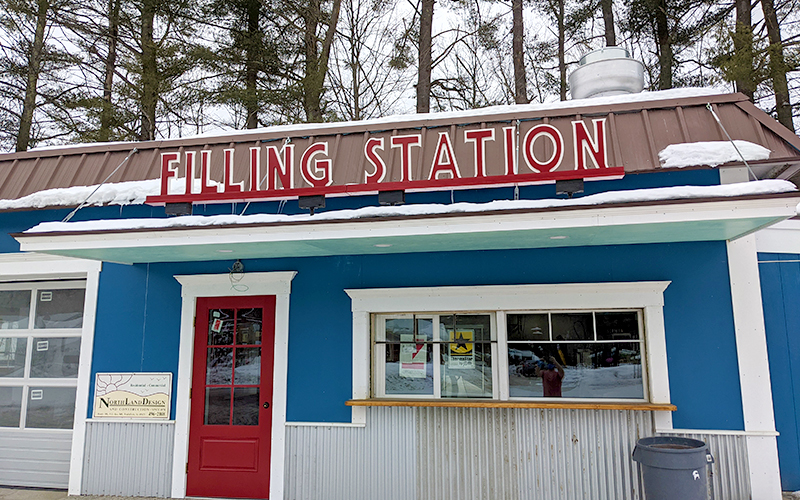 “I’ve always wanted to open a restaurant in an old gas station,” explained Brian Lewis, Fayston, about opening his second restaurant in Middlesex next week.

Lewis is also the owner of Toast and Eggs, a popular breakfast/lunch spot in Waitsfield. His new restaurant, The Filling Station, will be a sushi and burger bar with salads, vegetable dishes and a rotating collection of entrée specials. He’ll be offering craft cocktails with and without alcohol as well as beer with and without alcohol. Reservations open February 19 and the current COVID-19 capacity is 20 people.

The Filling Station is located across Route 2 from Red Hen Bakery and Café and Camp Meade. This new business continues the renaissance of that property under the ownership of Planetary Matters.

“I was in Red Hen with my wife and mother-in-law and looking across the street at that gas station and thought, I’m going to open a restaurant there,” he said, adding: “With those doors open in the summer it will be super bright, inviting and friendly.”

Lewis leases his Toast and Eggs space from Russ Bennett, Waitsfield, and mentioned the fact that he wanted to open a second restaurant in Middlesex.

“Little did I know that Russ Bennett, who I lease the Toast and Eggs space from, was one of the partners in Planetary Matters. So, when I mentioned it to him, that I wanted to put a restaurant in there, the conversation really started,” Lewis said.

That was more than a year ago and they got to work on figuring out how to upfit, outfit and remodel the building to open a restaurant during a pandemic.

In collaboration with Planetary Matters, NorthLand Construction, Bennett’s company, gutted and remodeled the building. The land around it was regraded, a new septic system was constructed and there are 20 parking spaces on each side of it.

“I think there is real opportunity for people who want to be in the restaurant business even during a pandemic. At Toast and Eggs, we were able to pivot to a takeout window and then install an air exchange system. Like any business, we managed it the way it needed to be managed at that time,” he said.

Lewis is not a micro-manager. He got his Toast and Eggs staff stood up and capable of managing the restaurant and is letting them do their jobs at this point. He’ll take on The Filling Station, for the time being, and may also pursue more restaurants.

“At The Filling Station, I hope to recreate what I did at Toast and Eggs, to install a staff and have them run and manage a restaurant, creating opportunities for people to grow and develop and creating new jobs so I can keep expanding my businesses and employing people,” he explained.

Lewis is a native of Connecticut who’d skied in Vermont in his early 20s while he owned a seamless gutter business. After he got tired of living in Connecticut, he moved to Seattle and became a commercial diver, working on underwater welding and construction.

“While I was working there, I started cooking at an Irish pub, and I never looked back,” he said.

That gig led to many more restaurant gigs at a variety of ever more upscale restaurants in Seattle, LA and Providence, Rhode Island.

“Then I got tired of cities. I have a childhood friend who lives in Waterbury and was visiting him often. I decided I was going to move to Vermont,” he said. It was a decision that landed him at Sugarbush where he was the executive chef at Rumbles before opening Toast and Eggs.

What he loves about cooking is making people happy and because it is always challenging.

“Cooking is always challenging. If you master a technique, there’s 100,000 more to master. My thirst of knowledge will never be quenched. Food challenges me, there’s no end, there are so many cuisines and styles and scenes,” Lewis said.

Lewis and his wife Misa Dikengil were neighbors living across the street from Toast and Eggs when they met. She’s a yoga instructor and their yoga studio, Valley Glow Yoga, closed at the beginning of the pandemic. Lewis and Dikengil have two sons, ages 7 and 18 months, and a third baby due in July.

Toast and Eggs The Filling Station