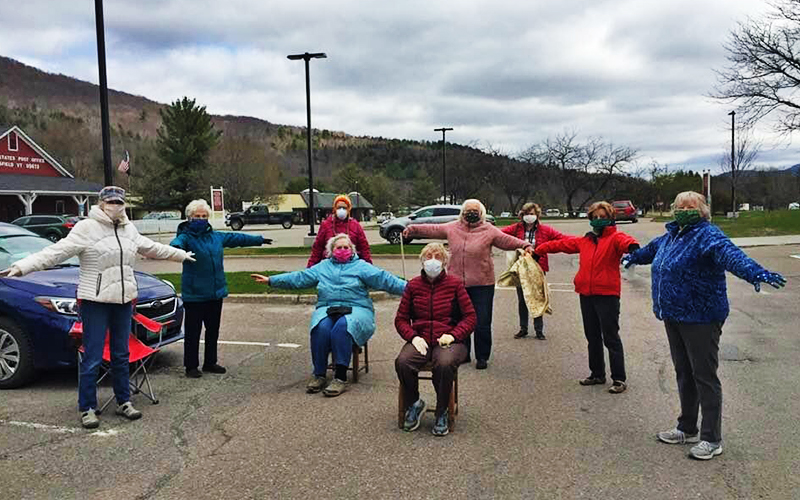 Anyone who frequents Three Mountain Café in Waitsfield (and really, who doesn’t?) has seen the members of the Grandma Mafia gathered around one of the tables on weekday mornings.

Pre-pandemic, this group of mostly women, but often men, gathered for a cup of coffee, companionship and a lot of laughter. Most members of the Grandma Mafia are older and /or retired and the onset of the pandemic in March 2020 put a short-term pause on their daily meetings.

After laying low for a bit, they reconstituted themselves in appropriately-distanced lawn chairs in the empty parking lot in the Mad River Green. Later in the summer and fall they could be found grouped on the sidewalk a few doors down from the entrance to Three Mountain Café. Part of the charm of the mafia’s gatherings is how (pre-pandemic) other people entering the coffee shop pull up chairs to join them for a few minutes or for the duration. 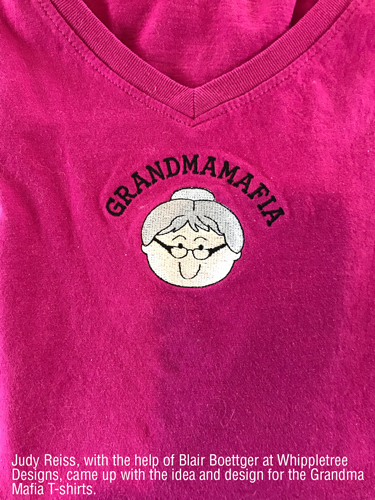 Fast forward to February and March 2021 when vaccines became available and mafia members and their spouses have been able to get vaccinated. Members had been meeting prior to vaccines with masks up and spaced far enough apart, but only once or twice a week.

The Valley Reporter reached out to a few of the mafiosos for their thoughts on the vaccine, their coffee klatch and how their lives have changed.

Joann and Gordie Eurich live in Waitsfield and have had both of their vaccine shots. Gordie is a firefighter and got vaccinated first. Joann is a regular at mafia meetings and Gordie shows up sometimes as well.

Joann said she and Gordie tolerated the shots with no problems. Getting vaccinated allowed them to travel to Ithaca last weekend to visit their granddaughter. That was the first travel for them since last year. They have a son in Montpelier who they haven’t seen much of.

She is happy that the coffee group is again meeting regularly.

“The coffee group, for me, is such a bright spot in our day to get us going and connect us. That’s real human connection and it’s so important,” she said.

Rachel McCuin lives in Warren and she spent a large part of the pandemic up near the end of Lincoln Gap, going out only for food and doctors’ appointments. When the Grandma Mafia couldn’t meet, members stayed in touch by telephone she said. She and Joann Eurich were classmates and she joined the mafia a couple of years ago.

“It’s good to be able to get back together again and feel a little bit of comfort and friendship,” she said.

She’s also looking forward to getting on with normal life and being able to get out and about more.

She said that earlier this winter during their twice weekly gatherings they were strictly masked up, removing them only to take a sip of coffee.  She’s been a member of the mafia for several years and says members call each other to plan what time they’re gathering on any given day.

“When you’re older and living alone, it’s great to have the company. We have a lot of laughs,” she said.

Now that she is fully vaccinated, she’s been able to see her granddaughters and had coffee with one of them last weekend. She’s not seen as much of her grandson but expects to be able to now.

“I feel now, that I can lead a somewhat more normal life,” she said and was happy that most of her family, except her grandson Eamon, who is 14, have been or will soon be vaccinated.

Frannie Dinozzi, Fayston, redid her condo throughout the course of the pandemic. Now that she’s fully vaccinated, she’s excited to be able to go out and see her friends more often. She’s been a member of the mafia for many years and was there well before the late Judy Reiss (a mafia ringleader) gave the group its name and had T-shirts made.

“I don’t know how we all got together, but it spread once we did,” she said, adding that she’s looking forward to warmer weather and the mafia meeting more often.

She has family in Maine and the last time she saw them was last year. She is excited to be able to visit them. Her daughter is a Montessori teacher and has been working, taking her youngest child to school with her. The other four kids have been learning from home.

Sandra Brodeur, Warren, says she’s not really a member of the Grandma Mafia, but acknowledges sitting down for a cup of coffee a couple of times.

She is fully vaccinated and says it feels wonderful.

“I get really upset at these people who say they’re not going to do it. That’s putting everyone else at risk,” she said.

Being fully vaccinated made her more comfortable having her grandchild visit and she recently took another vaccinated friend for medical treatment and they went out to lunch afterwards, sitting down inside a restaurant which she said, “felt good.”