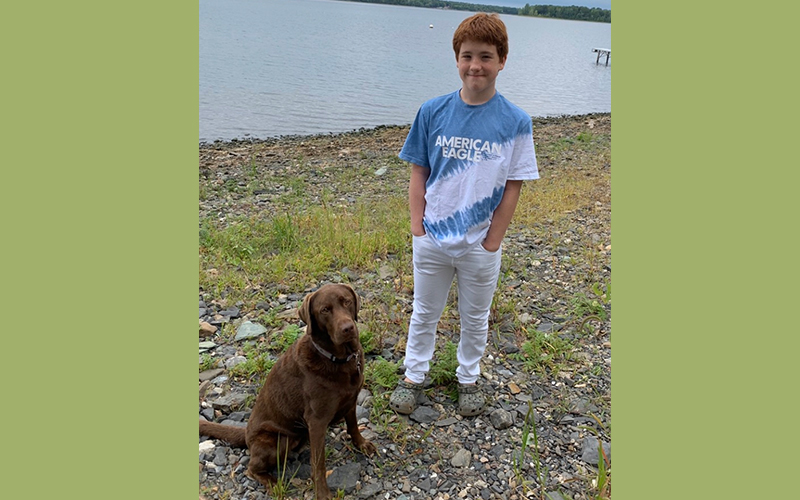 Last week Vermont opened up COVID-19 vaccines for those ages 16 to 64 with chronic health conditions, including type 1 and type 2 diabetes. That frustrates Jenni Heath, mother of 13-year-old Aiden Heath who has type 1 diabetes and would really like to be vaccinated.

Jenni Heath and her family live in Waitsfield. Some readers will remember them because of Aiden Heath’s fundraising efforts to purchase a diabetic service dog. That dog, Angel, is now a part of their family and a critical part of monitoring Aiden’s blood glucose. Jenni Heath said that for Aiden and many of those with type 1 diabetes a common cold or stomach bug or flu wreaks havoc with their blood sugar and efforts to keep it stable.

“It’s really hard to fight illness and blood sugar at the same time. It’s a balancing act and we’re frustrated, mostly because Aiden is frustrated. He is smart and he knows what it’s like to be have type 1 and be sick. He’s very healthy in the summer which we spend at the lake and then when he comes back to school in the fall, he catches every little thing that is going around. He spends a lot of the school year fighting illness,” she said.

Aiden Heath is attending Harwood’s remote academy for seventh- and eighth-graders. His mother said he wants to be able to feel comfortable going back to school in person but without a vaccine he’s worried. Being remote this year has worked well for him because he hasn’t missed any classes due to illness, she said.

“When we see these vaccines getting rolled out and he thinks, ‘Wow, if I were just three years older, I could be getting it right now.’ He is 13 and 5 foot 7 inches and weighs 150 pounds. He is bigger than many people getting the vaccine,” Heath said.

She recalled a visit with his pediatrician when he specifically asked if he could get it, knowing the doctor would say no -- and she did. She explained that trials were underway for 12- to 15-year olds and told them she hopes he’ll be able to get it when they come out.

“We’re sitting here with our fingers crossed that it comes through sooner versus later. I don’t know how I feel about him going back to school in the fall unvaccinated. I know adolescents carry the virus the same as adults. We feel the risk of the vaccine is worth it because the risk of him getting COVID is worse in our eyes,” she said.