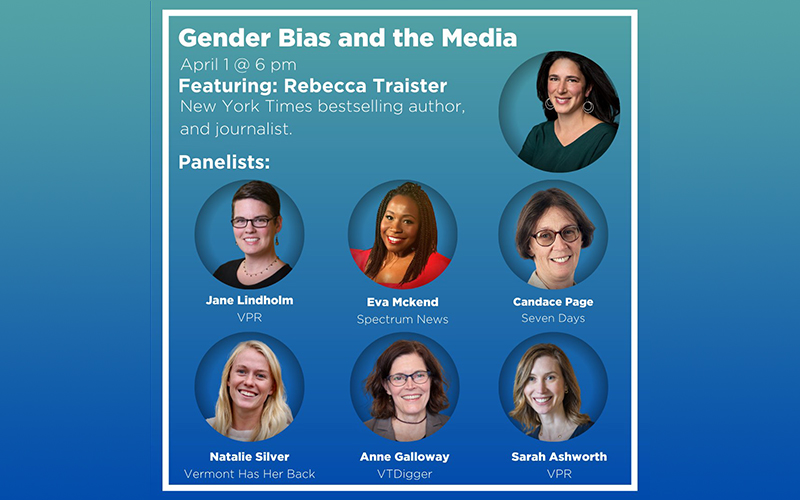 In celebration of The Valley Reporter’s unique female journalist composition, the local paper covered last night’s Gender Bias and the Media forum, hosted by VTDigger and moderated by VPR’s Jane Lindholm, featuring author and journalist Rebecca Traister and several other state-based and national female reporters. At the forum, Traister, whose best-selling book “Good and Mad: The Revolutionary Power of Women’s Anger,” made many powerful, hair-raising points about the role of women, and other marginalized groups, in the media.

First, she encouraged women who feel angry and frustrated about their experiences in a male-dominated power structure to express and reflect on their anger, which can be a powerful tool for self-discovery and political change. Traister argued that women’s anger often gets sapped from the stories people are told about powerful women. Consider Rosa Parks, for instance, who was portrayed as stoic, calm, and nonaggressive in her refusal to move from her seat.

In reality, “she was livid about the rapes of black women at the hands of white men,” said Traister, who argued that her refusal to give up her bus seat was a consciously anger-fueled political action.

Through these stories of female rage-suppression, Traister urged panelists and listeners to be alert to surreptitiously menacing perpetuation of the quiet, polite, noncomplaining female norm, adding that journalists have the power to change these norms by questioning them and writing about them.

She argued that just because something is a norm, doesn’t make it right, citing the more dramatic example of how sexual assault has been normalized in the media. For instance, Donald Trump skated into the oval office despite numerous sexual assault allegations. Triaster believes the media’s coverage of these allegations had much to do with how Trump’s actions were perceived. At the time, every media outlet covering Trump’s campaign was staffed and run by white men, many of whom have since been fired for sexual assault, from Matt Lauer on the Today Show, to Roger Ales on Fox News.

After Traister’s speech, Lindholm opened up the panel to questions for panelists, and a dynamic conversation ensued about how female journalists can challenge the norms of the white, male, heterosexual power structure.

A video of the forum is available for the next two weeks on the VTDigger Youtube channel: