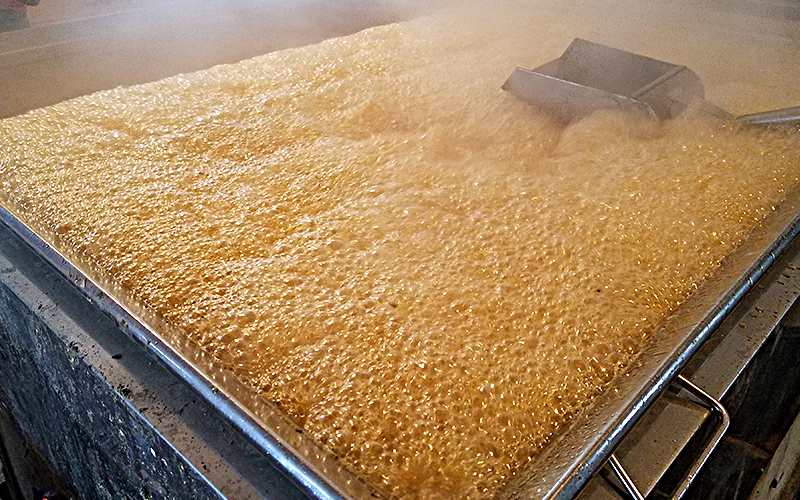 Scrag Mountain Maple owner Dave Gavett and his son, Sam Gavett, have recently been hard at work boiling sap into syrup. Every year, there are three or four nights when their maple syrup hits its peak in terms of the rich taste of maple, and last week was it.

However, this year’s crop is short compared to last year. “It was very cold deep into March, and then warmed up for a very long time without freezing, which isn’t ideal for sap flow,” said Dave. “Hopefully we will get a few more freeze and thaw cycles.”

The Scrag Mountain Maple operation spans multiple tracts of land in Waitsfield. “We currently have about 16,000 trees tapped and are striving towards making the operation as energy-efficient as possible,” said Sam. “We have overhauled all of our equipment with the idea of making every component as efficient as possible.”

Scrag Mountain Maple has optimized its energy efficiency by using a vacuum pump with a variable speed setting that adjusts to demand. Moreover, the sugarhouse has a wood-fired evaporator that burns every bit of wood used in the sugaring process.

“To make syrup you need to boil the sap to evaporate a lot of the water that’s in the sap to make syrup. The heat source for the boiling process is the wood we cut sustainably from our sugarbush,” said Sam. Through healthy forestry practices, like selective thinning, Scrag Mountain Maple is able to cut trees while supporting a healthy forest ecosystem.

“We also have two solar arrays to help offset the large electrical load of the sugarhouse,” said Sam. As the operation has expanded over the years, the Gavetts have added on to the sugarhouse using spruce wood from Scrag Mountain, milled in the Gavetts’ own wood mill.

The Gavetts distribute most of their syrup in bulk drums to Butternut Mountain Farm in Morristown, Vermont, but also sell it directly through the Mad River Taste Place in Waitsfield.

Dave got his two sons into maple sugaring with hopes of spawning a love for nature in them, along with an appreciation for the rewards of laborious, hands-on work. “I started when I was a kid and wanted my boys to have the same experience of working in the woods with family and appreciate the hard work that comes with it,” he said. “Working in the woods is really enjoyable, relaxing and you learn to appreciate nature.”

Both Dave and Sam agree that sugaring is hard work, with long stretches of labor during the boiling season that lead to sleep deprivation. Even after boiling season, summer logging and firewood processing is an arduous process.

Most people don’t realize that sugaring is a year-round operation. “Every season brings different tasks that ultimately will lead to the next season,” said Dave. “For example, maintaining lines, forest management, tapping and pulling taps and many more processes that occur outside of the spring sugaring season when we are making syrup.”

Despite all the hard work, there is also much to love about the process too. “I like being with my family in the woods and the camaraderie in the sugarhouse. I like producing a food product that is healthy and people enjoy,” said Sam.

While Sam is busy at his full-time job working for Northern Reliability (NRI) in Waterbury, he stays involved in his family’s sugaring operation as much as possible. “I am deeply rooted in the sugaring operation, as I have grown up working with my family, and I find myself always drawn home to help whenever I have an evening or weekend free,” said Sam.

While the Gavetts have been successful in their sugaring operation thus far, climate change is gradually affecting sap production cycles that could put maple sugar operations in jeopardy. “At the forefront, I believe climate change is one of the greatest threats that maple syrup producers face. The wild weather swings and the shortening of the season causing the trees to bud sooner, directly impacts sap production,” said Dave.

However, Dave generally believes the future of maple sugaring is bright. “It’s a good product and more and more people are trying and liking syrup, which is causing the market to expand worldwide,” said Dave. “Vermont has a reputation for producing really great syrup and we are proud to be a part of that.”