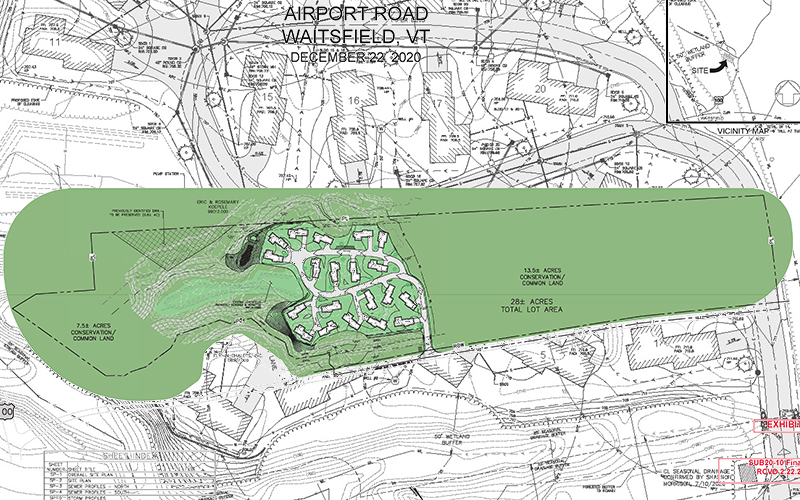 After a March 23 hearing, the Waitsfield Development Review Board closed the hearing on an application by Mavis LLC to build 20 dwelling units on 29 acres on the south side of Airport Road. The board has 45 days to issue the final decision.

T.J. Kingsbury, Mavis LLC and Chris Austin of Grenier Engineering walked the DRB through the final version of the project. It has undergone many iterations since it was first submitted as a sketch plan in 2018. But the original permits for this property were issued in June 2005 for a 24-unit planned residential development (PRD).

When Kingsbury brought the project back to the town in 2018, it called for 24 units, but that has now been amended to 20 units clustered on a common parcel and sold as condominium units. The project layout is similar to the original 2005 plan with 13.5 acres of protected forest to the west and 7.5 acres to the east which will host the wastewater system for the development. In all there will be 6 acres of residential development and about 22 acres of protected land. There is a plan for recreation trails as well.

Per the engineer’s documents for the town, the project is geared toward providing reasonably-priced housing for those seeking maintenance-free living, including seniors who want to downsize. The project will provide private living in individual dwellings within a community setting. People will own their homes with the common areas owned by a condominium association that will maintain them.

At the final hearing DRB members discussed the locations of mailboxes and utility lines and determined that the plan has been reviewed by the Waitsfield-Fayston Fire Department and that the fire department asked for a truck pull off on the development road.

The board also discussed two comments received from people who live on Airport Road concerned about the impact of traffic and dust on the road during construction and from the development. The DRB had considered those impacts at its preliminary plan hearing. The board discussed the concerns and noted that this section of Airport Road is included in the town’s paving plan and is slated to be paved in 2025. The board further noted that the project as currently proposed will result in fewer units from what was originally proposed.