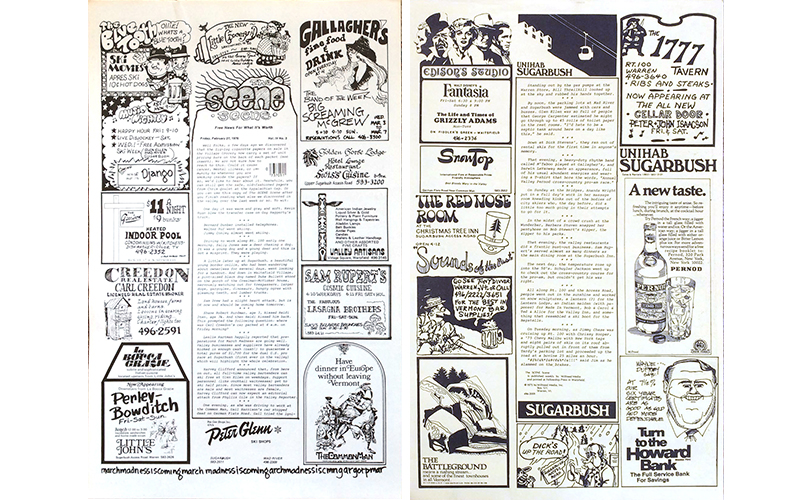 Felix von Moschzisker, East Warren, was one of the early contributors to The Valley Reporter when it was only a year old.

"Back then the paper was pretty skimpy -- only about 12 pages long, maybe as little as eight sometimes -- and it was starved for copy," he said

He pitched the idea to collect a couple dozen unrelated vignettes from Valley life and print them up in column form for the next week "to remind ourselves how charming it was to live here," he said.

He strove to include people of all ages -- native, local and tourist – plus dogs, cats, trees, stores, gas stations (Haps! Kingsbury’s!), local roads by name, the weather, ski conditions, etc.

"The items were intended specifically to have zero news value," von Moschzisker recalled. He used a lot of proper names so that local people could read their own names in the paper for no good reason. He left his own name off the column," with the coy intention of creating a little mystery over who was sneaking around writing this up," he said.

The first SCENE Scene appeared in the issue of October 13, 1972. "And after it had appeared a couple more times, people were talking about it in the bars and stores. I knew I had something lively on my hands," he said.

"On Saturday, the first measurable snowfall of the year dumped a respectable three or four inches into the valley. Younger kids rolled large balls of snow and propped them up into snowmen. Older kids went out for walks in the night woods to watch the large flakes filter down through the trees and feel the hush. Young dogs who had been born into the world since the previous spring and had never before encountered large amounts of snow just went crazy."

He asked then Valley Reporter editor Phyllis Gile if he could be paid and was told there was no funding for columnists in a new fledgling newspaper. At the suggestion of the late Billy Brauer, von Moschzisker went rogue and published the column as its own newspaper. He drummed up advertising by going door to door at restaurants, lodges and shops.

"And the independent SCENE Scene was launched. I made my living off it for five straight ski seasons, all the way through 1977. Along the way, its content shifted significantly, from covering the whole valley at large to a somewhat narrower focus on the colorful skiing and night life culture of the ‘70s," he recalled.

Von Moschzisker said that the credibility he gained as a publisher of local advertising, producing his SCENE Scene every week enabled him to start up a restaurant guide, a guide book and the original Valley map now called the Discovery Map, as well as The Valley Blue Book.

"In The Valley ski bum economy that was like joining the middle class," he said.

"I am exceedingly grateful to The Valley Reporter for running those first columns! And all the advertisers who trusted me to produce them. Many thanks, also, to Billy for giving me the idea to publish my crazy content on its own. Ideas are so important," he said.