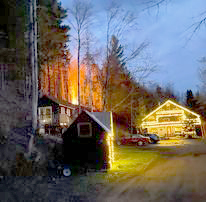 Residents of Pine Street in Duxbury responded to a large blaze in the woods on the north side of the road by calling the Waterbury Fire Department around 8:30 p.m. on Sunday, April 25. The blaze led to the fire department calling Vermont State Police to manage a truculent logger whose identity police have not released.

Pine Street didn’t know that the fire was the result of logging activities. Waterbury Fire Department chief Gary Dillon responded to the scene along with about a dozen volunteers from the fire department and determined that the blaze was part of a logging operation organized by the owners of the Grunberg Haus.

‘The fire was intentionally lit by a logger who did not get a burn permit,” Dillon said, noting that had the logger had a burn permit, the town’s fire warden would have known and road residents who called would have been informed that it was a logging operation.

“He told us he had anger management issues and threatened to put more wood on the fire. He said he was not going to get a burn permit and that it was safe to burn. He was less than cooperative,” Dillon said.

After the logger threatened physical violence to the firefighters, the Vermont State Police were called to de-escalate the situation.

“This was easily avoidable. It went downhill from the moment we arrived there,” he added, noting that volunteer firefighters don’t need to leave their homes at 8:30 on a Sunday night to be faced with this kind of behavior.

Vermont State Police troopers talked to the logger and the firefighters were able to douse the fire and leave the scene.

The Valley Reporter and the Waterbury Roundabout reached out to the Vermont State Police seeking the name of the logger and learned that charges were not filed in the incident.

Sergeant William Warner, in an email response, said the VSP involvement was limited to de-escalating things.

“No enforcement actions were taken or expect to be taken on our end. I’m not sure if the fire department is looking to pursue things on their end. Since no tickets were issued or arrests were made, I don’t think I can release his name. I’ve cc’d our Public Information Officer and Records Custodian,” Warner wrote.

The records administrator Heidi Storm responded by email noting that the “name would be redacted using exemptions found at 1 V.S.A. 317 (c) 7 related to personal documents relating to an individual.”

Pressed by The Valley Reporter and Waterbury Roundabout on how the logger’s name could be considered personal documents, Storm listed documents and information “including name, date of birth, address, telephone number, Social Security number, name of employer and information which could “reveal intimate details of a person’s life, including any information that might subject the person to embarrassment, harassment, disgrace or loss of employment or friends.”

The two news organizations responded to Storm with an email stating:

“These are not the details we are seeking. We are seeking the name of the person whose behavior resulted in not just one taxpayer-funded entity responding, but two taxpayer-funded entities to respond. This person's behavior required a fire department to call the VSP in order to do their job. If this person had been involved in a car accident with no charges resulting, his name would be public. We respectfully ask that the logger's name be provided.”

Further details were not available at press time.