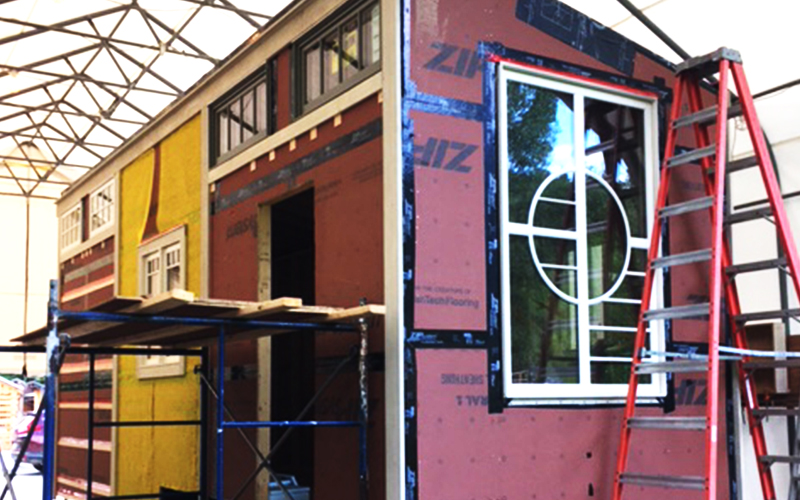 After a planning process that stretched from last October to last month, the Fayston DRB approved a planned residential development application for a six-dwelling tiny house project on Abby Road off North Fayston Road.

The project is the brainchild of Abby Dreyer who was motivated by the extreme lack of affordable housing in The Valley.

“There’s no affordable housing anywhere in The Valley. The town’s zoning only allows me to build six units. I would like to have been able to provide more,” she said. Dreyer said she hoped to get the infrastructure installed this summer including septic, water and power and hoped to get two tiny houses completed before winter. She’d start working on the next two next summer.

Per the DRB decision, three of the houses can be fixed and three can be movable. Dreyer has a partially completed tiny house on a trailer already thanks to a class she took last summer at Yestermorrow.

“Last summer I jumped into this class at Yestermorrow on building a tiny house on a trailer. I learned that they had found a client for this particular tiny house build and that the client backed out at the last minute. I ended up buying it and joining the class and met some great people during the build,” she said.

S, she’s got that tiny house, which is not finished. Once she gets her infrastructure in place, she’ll bring it to the site and finish the interior. The other structure that she’ll attempt to get built this year is a conversion of her garden shed into a fixed small house. She’ll add two more structures in 2022 and the final two in 2023.

Dreyer already has an accessory dwelling unit on her property as well, something she’s had for 15 years and has offered for year-round rental.

The DRB decision calls for minimum leases of six months for each of her units.

“The DRB was very concerned that I was going to Airbnb these units, but that was the last thing I wanted. I wanted to have a little community of like-minded people who can’t afford to live in this Valley. I’ve got a list of people who want to move here,” she said.

Dreyer’s home and the project are located on 114.33 acres on North Fayston Road. Permitting for the project required that she subdivide the property into a 108.33-acre parcel and a 6-acre parcel where the tiny houses will be located. As part of the conditional use permit, Dreyer’s current driveway will be upgraded to lead to the development and the select board has approved the name Abby Road for the road. One drilled well will serve the project along with one septic system. Each unit will have two parking spaces and one bedroom. Utilities will be underground.

Dreyer said the dwellings are going to be in the woods on her property and said the fact that she’s living on large tract was another reason she wanted to do her part to help with The Valley shortage of workforce housing.

“Once I started thinking about it, I thought let’s make some housing on this beautiful piece of land. It seems silly to sit on it by myself,” she said.

She doesn’t see tiny houses as a new phenomenon. She sees them as a return to an era when everyone lived in much, much smaller houses.

“Tiny houses used to be everywhere in this country and then they just got bigger and bigger,” she said, noting that her cottages would be well under 1,000 square feet.

She is also contemplating selling the movable houses to tenants who are able to save enough money to buy some land and want to take the house they’re renting with them. She’d build a replacement movable house if that happens