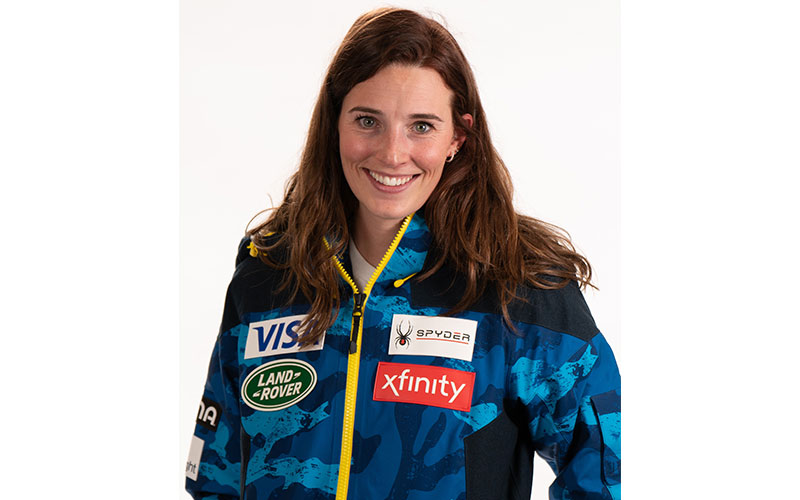 Ali Spencer has loved skiing for as long as she can remember. Spencer, who was raised in Fayston, grew up skiing at Mad River Glen before attending ski racing academy Green Mountain Valley School (GMVS) for high school, where she graduated in 2010.

As a child, Spencer thought she would grow up to be a professional skier. “I wanted to be a ski racer!” she said. However, a traumatic injury led her to rethink her life path. “I had an ACL injury fairly young, when I was 15,” she said. While recovering from her injury, Spencer was exposed to another side of ski racing: athletic training and rehabilitation. “I saw the athletic training side of ski racing through that injury. I saw that it was a path I could take but still be involved in ski racing. Fifteen-year-old me was like, I could do this!”

Now, Spencer is the assistant coach and certified athletic trainer for the U.S. Women’s Development Team, where she helps the best young female skiers in the United States become world-class alpine racers, all while training in the most beautiful places in the world.

Spencer and her team of six 18- to 21-year-old athletes have spent 40 weeks of the past year traveling to train and compete in seven different countries, including Italy, Germany, Slovenia, Austria, France, Bulgaria and Switzerland. “We traveled throughout the pandemic which was just wild!” said Spencer. “I’ve had 102 COVID tests!”

Spencer’s path to the U.S. Ski Team was focused and direct. After graduating from GMVS, Spencer attended Castleton University, where she earned her bachelor of science in athletic training. With every year of school that passed, her dream became clearer in her mind: She would be an athletic trainer and a ski coach for the U.S. Ski Team.

After graduating from college, Spencer spent six years preparing for her dream job. Spencer’s first job out of college was in Elevation Physical Therapy at her high school alma mater, GMVS. In addition to being an athletic trainer, she was also able to do some ski coaching there. “At GMVS, I coached ski racing in the weekend program,” Spencer told The Valley Reporter.

Spencer was saddled with even more responsibility when she took a job at Burke Mountain Academy in East Burke in 2017. “At Burke, I was athletic trainer and I coached U-19 women. I also ran the Return to Snow program.”

The Return to Snow Program at Burke revolved around bridging the gap between injury and competition. The program helps athletes progressively re-acquire fundamental skiing skills in a way that lets them build on their strengths while taking into account their injury-related weaknesses.

“In that program, I was getting athletes back on their feet, back on their skis, helping them hone in their skill set and build confidence. The goal was to bring them back to 100% competition level in a scientifically graded way to make sure they aren’t ever at risk for re-injury,” said Spencer.

It wasn’t until May of 2020, after three years of working at Burke, that Spencer’s dream job came to her. “In May 2020, I got this call from the U.S. Ski Team saying that they were looking for an athletic trainer and a ski coach. I was like hey! I can do that!” said Spencer.

Spencer accepted the job. However, one major problem made the dream job a little more complicated than she had imagined it would be: a global pandemic. “The challenge was creating relationships with my coworkers,” explained Spencer. “It hard enough when you’re traveling not in the same place. But with the pandemic, even when you are in the same place, you can’t interact because of COVID.”

Throughout the pandemic, the U.S. Ski Team has been strict about keeping athletes, coaches and trainers in community pods. “We have very strict rules about testing and living within the bubble,” said Spencer. “We’re eating together. We’re not going out to eat. We’re not socializing with other teams.”

LIVES IN THE BUBBLE

Spencer lives her life in the bubble, spending nearly every waking moment with her team. In a typical day, Spencer wakes up at 5:30 a.m., has a quick breakfast and leaves at 6 a.m. for the mountain. On the mountain, she helps set the course and then wears her assistant coach hat, coaching skiers until noon. Before 1 p.m. Spencer is already checking in on athlete injuries, doing athletic training treatment until about 3 p.m. However, her day doesn’t end there. From 3 to 4 p.m., Spencer will often run a workout with the team. This could be a core workout, a lifting session or even a hike. After the workout, the team has dinner together and repeats the process the next day. “It’s a 24-hour, seven day-a-week deal,” said Spencer about the job.

Personal time isn’t abundant on the U.S. Ski Team schedule, but Spencer still finds time for it. “I really give myself an hour a day,” she said.

Spencer also derives motivation to work long hours from her athletes. “The athletes are highly motivated. When they’re giving you 100%, it’s easy to give them 100%. They work so hard,” said Spencer. “They’re all very intrinsically motivated. They lift each other up. They motivate each other.”

Appreciating the opportunity to live in the most beautiful places on Earth also helps Spencer cope with life in the nomadic bubble. “I travel to the most beautiful places in the entire world. When the moment doesn’t feel really great, I just look out the window and appreciate where I am,” she said. “Learning to be adaptable and then having that gratitude, it really has allowed me to enjoy the constant change and the long days.”

Editor’s Note: Nominate local people to be featured in this series of stories about locals who are making their marks in the world. Send nominations to This email address is being protected from spambots. You need JavaScript enabled to view it..