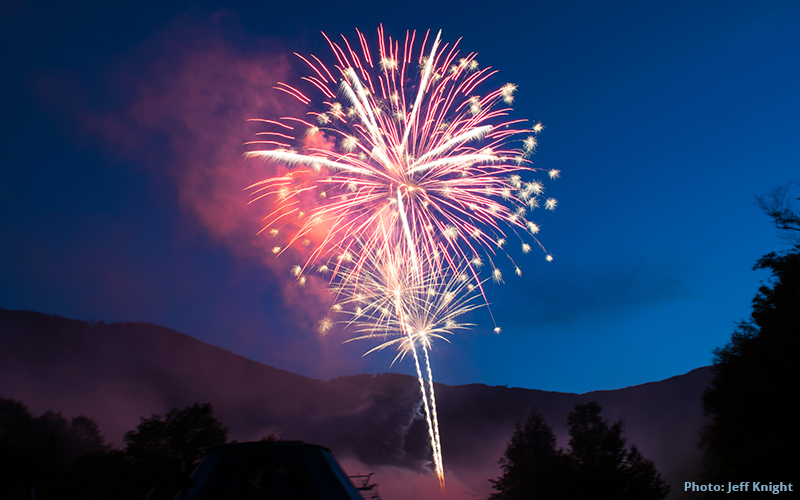 Community bulletin boards and social media have seen multiple discussions about fireworks scaring dogs, horses and livestock. At issue are both backyard fireworks displays that agitate the pets and animals in specific neighborhoods and bigger displays such as those seen at the Fourth of July, New Year’s Eve, President’s Birthday week and often at weddings.

This week Sugarbush’s director of sales Diane Forester issued a post explaining that the resort’s bigger fireworks displays are posted on its website and local advertising includes the date and time.

Sugarbush spokesperson John Bleh said the resort files permits with the Warren Fire Department and noted that there are smaller, private fireworks displays that are part of weddings and other gatherings at the resort. Anyone who wants to be informed when fireworks will be held at the resort can email This email address is being protected from spambots. You need JavaScript enabled to view it. to be added to an email list.

But what about smaller fireworks displays and impromptu fireworks displays? Local towns have mixed protocols on how to handle fireworks. In Fayston, those wanting to hold a larger event (i.e. at Mount Ellen or Mad River Glen) bring their request to the select board for approval along with a certificate of liability, but according to town clerk Patti Lewis, there is no such permit or regulation for backyard fireworks.

In Warren, town clerk Reta Goss said the town does not have such an ordinance, but noted that Sugarbush does work with the fire department on its displays. Warren fire fighter and town constable Jeff Campbell said that anytime someone files for a fireworks permit it needs to be signed by the fire chief or fire warden.

“When I sign a fireworks permit, I always include that if there is any red flag warnings issued by the state or the local fire warden that the permit can be cancelled,” Campbell said.

What many people don't realize is its legal to purchase fireworks but if they don't have a license to set them off then as soon as they light them, they have broken the law,” Campbell added.

Campbell and Duxbury Select Board chair Mari Pratt shared Vermont’s regulations around fireworks. Those regulations state that “all fireworks are illegal except for permitted, supervised public fireworks displays. Fireworks are dangerous and unpredictable, especially in the hands of amateurs.”

The regulations explain that public fireworks displays conducted by trained professionals and supervised by local fire departments are a good alternative to personal fireworks use. A permit for display is required by the local chief of police and fire departments of the municipality in which the display is to be held.”

Applications for such displays must be submitted at least 15 days in advance of the intended display.

Pratt said that Duxbury does not have a town specific ordinance but uses the appropriate fire department for permitting. Duxbury is covered by the Moretown and Waterbury fire departments.

Cherilyn Brown, Moretown’s town clerk, said the town does not have a fireworks ordinance.

J.B. Weir, Waitsfield’s zoning administrator, said the town’s zoning does not speak to fireworks displays and select board chair Jon Jamieson concurred, noting that the town doesn’t have a noise ordinance because it is too difficult to administer and enforce.