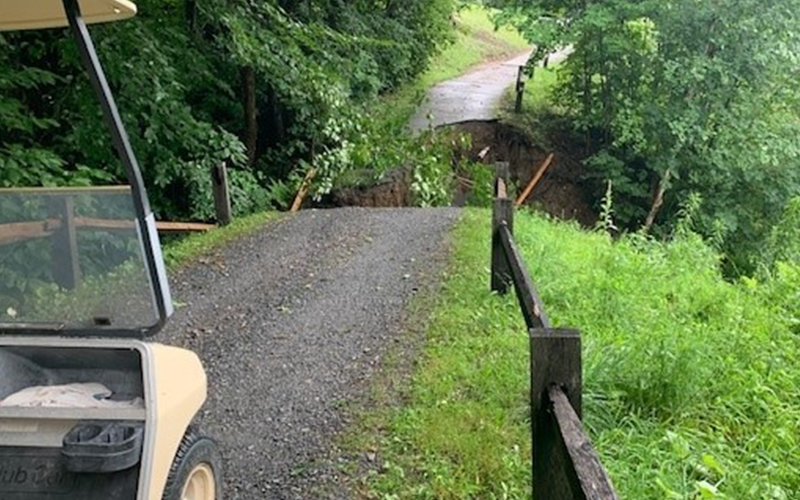 Last week’s intense thunderstorm damaged the back nine of the Sugarbush Golf Course, resulting in the temporary closure of four holes.

The July 20 storm washed out the Warren golf course’s cart path on hole 15 which closed the four holes on the back nine from last Wednesday through Friday and again Monday and Tuesday of this week, according to resort spokesperson John Bleh.

Bleh said the resort was able to get the four holes open for weekend play before finishing the repairs on July 27.

“Other parts of the course were hit hard as well with one of our bridges seeing heavy erosion and a fair amount of standing water,” he said.

“We are still recovering but the course is open and playing well now. Repairs continue,” he added.

That same storm washed out Butternut Hill Road in Waitsfield, resulting in the road being closed that day while the Waitsfield road crew with the help of Kingsbury Construction brought in truckload after truckload of fill to rebuild the road. Rolston Road in Waitsfield also saw some significant erosion, according to town administrator Annie Decker Dell’Isola. The Waitsfield Select Board issued an emergency declaration over the road on July 21.

Fayston Select Board chair Jared Cadwell said that several town roads saw some erosion and washout, but nothing that the town road crew couldn’t regrade to repair. He said the roads affected were Kew-Vasseur and Sharpshooters roads.

Mari Pratt, Duxbury Select Board chair, said that there was no major damage in Duxbury from the storm.

“We were blessed with this one; it did not do any real damage,” she said. Duxbury’s steep dirt roads often take a beating during heavy rainfall like what occurred last week.

Warren’s roads held up fine, according to select board member Bob Ackand who said the town saw nothing significant, just plugged culverts and small washouts.