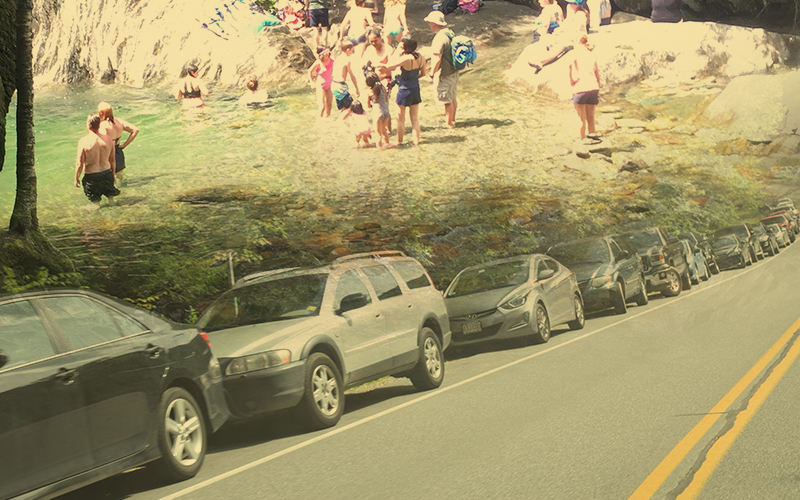 Anyone who has traveled Route 100 through Warren during the summer has likely encountered dozens of cars parked along both sides of the road by Warren Falls, a popular hiking and swimming spot. Reports have found as many as 35 to 40 cars per side in a ½-mile stretch, in addition to the parking lot, which fits about 35 cars. Cars parked along the road can present dangerous situations as vehicles round the bend. Pedestrians crossing the road also present potential problems. There have been collisions in the area in the past.

On July 27, the issue again came before the Warren Select Board. Select board members were joined by Jon Kaplan of VTrans, Chris Mattrick, district ranger for the Green Mountain National Forest, and Paul White, law enforcement liaison for the Vermont State Highway Safety Office and retired captain of Vermont State Police. White called the situation a public safety issue and said the goal was to avoid injury and accident.

Mattrick called Warren Falls “the busiest place in the Green Mountain Forest.” He reported resource impacts at the top of the ledge, where trees and soil have been “significantly impacted the last couple of years” in a few locations along the trail. The forest service does have funds set aside to purchase a fence to limit the resource impact. Refuse is also an issue, as there is no trash receptacle at the site, so forest service patrol and volunteers have to pick up a lot of trash. There is now a port-a-let at the site, which he said gets heavy use and there have been issues with the management company cleaning it regularly. Mattrick said there are plans to pave the parking lot, which would add a few spaces, though funding for that has not yet been secured. He said the parking lot cannot be further expanded, due to a Native American archaeological site.

Several potential solutions were discussed, including putting cones or a physical barrier in the middle of the road to curb speeds, reducing the speed limit on a seasonal basis, towing cars parked unsafely along the roadside and hiring a law enforcement officer to enforce speed limits. North Hero was cited as an example of a town that reduces its speed limit in busy areas during the summer. Such a change would need to go before VTrans. Stowe was also cited as a town that has paid for police presence in Smuggler’s Notch for a two-week period to discourage tractor trailers from going up Route 108, though White called that “not a sustainable thing indefinitely.”

Concerns about enforcing reduced speed limits were expressed. “People are ignoring existing signs, I don’t have a lot of faith that additional signs will have much impact,” Kaplan said. There was also discussion about contracting with a towing company to move cars parked dangerously with the hope that word would spread, discouraging drivers from parking alongside the road. One of the challenges, White said, was that, unlike municipal tickets (which Warren doesn’t issue), traffic complaints need to be issued to a specific driver, so drivers would need to be identified in order to issue a ticket, which would be “a lot of work.” He also said he was uncertain if fines could be enacted on a state highway, which he said he would look into. He also brought up the possibility of having buses bring people from Warren village to the Falls.

Parking and heavy use of the Warren Falls area continues to be a concern each summer.