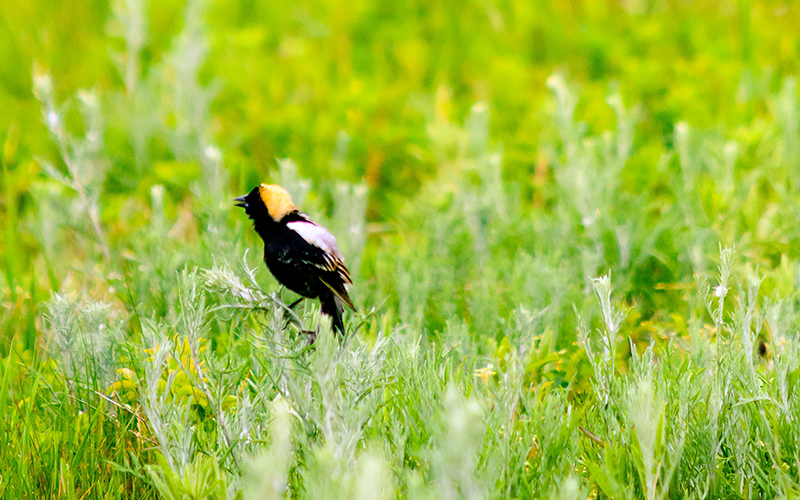 Grassland fields are cultivated as hay to feed livestock and horses. Bobolinks and other threatened grassland birds rely on these fields to nest and raise their young, and cannot nest anywhere else.

Female bobolink birds return to the same fields each year. The bobolink brain contains iron oxide, a magnet, so they can navigate from the earth’s magnetic field. Bobolink populations decline by 2% each year, according to the Cornell Lab of Ornithology. Eastern meadowlarks decline by 9% per year, and they’re expected to be listed as threatened this year, said Kevin Tolan, a staff biologist at the Vermont Center for Ecostudies.

To delay cutting and harvesting a field of grass decreases the nutrition of it for livestock and skipping a cutting is costly for the farmer.

One strategy has farmers mow once in mid-May and again 65 days later. This gives bobolinks time to lay eggs and raise young without the threat of being crushed.

Elwin Neill Jr. has managed Neill Farm in Waitsfield for 70 years. Neill switched from dairy to meat operations in 2012.

“It's pretty hard to ask a farmer like ‘Oh, geez, could you give up $1,000 an acre?’” said Neill who noted that a farmer would miss out on at least one cutting if they implemented the 65-day haying program.

That being said, Neill noted that he already follows the 65-day recommendation, mowing first early in May before the birds have nested and then again later in the summer.

Programs such as the Bobolink Project exist to compensate farmers for the money they lose when they use the 65-day program or delay haying. The project selects recipients through a competitive lottery. The farmers who submit the lowest per-acre bids are often selected, and sometimes they receive more money per acre than they asked for, according to the Bobolink Project.

The Natural Resources Conservation Service of Vermont also offers compensation to eligible landowners if they pass an evaluation after an application. The program incentivizes creating wildlife habitat, and their website offers more information.

Beyond farmers, homeowners can also help protect nesting grassland birds by how they manage their own lawns. Curt Lindberg, a resident in Waitsfield, let his lawn grow into a meadow.

“I do it to provide better places for the other species that call Vermont home,” said Lindberg. He learned that ecologists call lawns ‘deserts’ because of the lack of species in them.

“I've also come to find it very personally satisfying because the yard is kind of, like, alive,” said Lindberg.