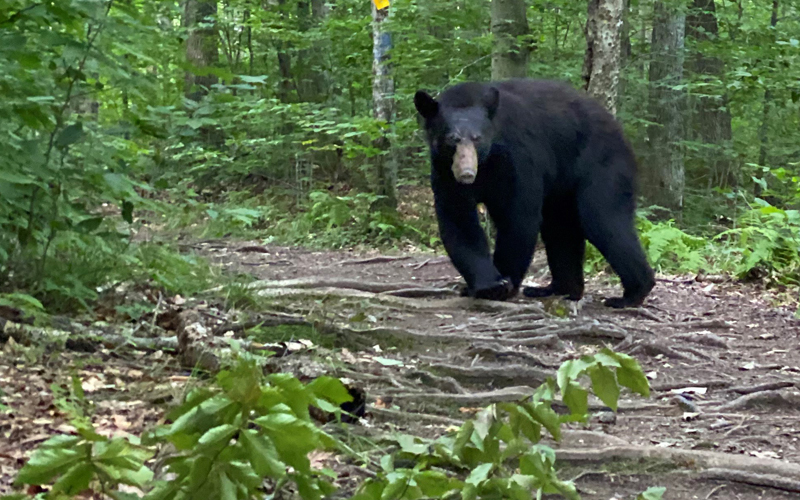 State game wardens and local officials are urging people to be cautious of a rogue bear in Waitsfield after a woman was pursued by a black bear while trail running in Wu Ledges last week.

Alexina Cather, Waitsfield, was running on the Hastings Trail in Wu Ledges at 8:30 a.m. on Thursday, August 5, and heard footsteps behind her. She turned and saw a large black bear behind her.

“I stopped and faced the bear and talked to it, told it to go away. It didn’t move at all and kept walking towards me. I got my hands up over my head to make myself bigger and yelled at it,” said Cather who is 5 feet 1 inch tall and was wearing black shorts and a white top.

She said after a minute or so she realized that the bear’s behavior was not normal and she began throwing rocks at the bear and backing up, trying to distance herself. She said it seemed like the bear was trying to flank her. She Facetimed her partner, Eli McCoy, who watched half of her encounter with the bear while simultaneously calling 911.

She continued yelling and throwing rocks at the bear (video of her encounter is on The Valley Reporter’s Facebook page) and ultimately began running toward her car.

Cather said she wasn’t wearing perfume or lotion or anything particularly scented and said she is lucky she is very fit, but she was out of breath by the time she got to her car, she noted. She encountered the sheriff who responded to her partner’s 911 call as she was leaving Hastings Road and filled him in and later talked to the state game warden.

She said she wanted to share the story of her encounter because she often walks that trail with her kids and the Wu Ledges trails in general are very highly trafficked.  She said she usually runs with her dog which in last week’s incident might have made things worse she felt.

“I wouldn’t wish this on anyone,” she said.

Vermont state game warden Dustin Circe investigated, spending seven man-hours on the trail with other wardens looking for the bear. He talked to four neighbors in the area and three reported having had issues with a bear getting into trash or compost.

Circe said this type of incident is extremely rare.

“I’ve talked to my higher ups, bear biologists, my colonel and they’re not aware of anything like this. Last year on the Long Trail there was a bear that learned to steal backpacks from the lean-tos and would follow people from a short distance away. We’ve only ever had three actual bear attacks on people in the state, provoked attacks. We’ve never had an unprovoked attack,” Circe said.

Of those three attacks, one was in the 1970s when a hunter shot a bear and got mauled. The other two were people hand feeding a bear, he said.

“As for what happened last week, I believe her response was correct. She made herself big and yelled and threw things at the bear. I talked to her partner Eli as well and at one point he recommended that she run, but that’s never what you want to do. She was doing 100% the right thing. When she got a little distance from the bear she went faster,” Circe said.

Circe worked with town officials to get signs made and put at near the entrance of the Wu Ledges trails on Thursday morning.

As for what happens next, Circe said if the bear persists with this behavior the decision on what action to take would come from his bosses.

“The only thing I can say is that in situations in the past, if a bear has learned to break into a home, it’s difficult for a bear to unlearn that behavior once it associates that behavior with food. It’s very difficult to dial back that behavior. Sometimes those bears have to be euthanized. But to be clear, with this bear, we’ve never had an incident like this before and euthanizing it is not the interest in this case. I hope it’s a fluke,” he added.