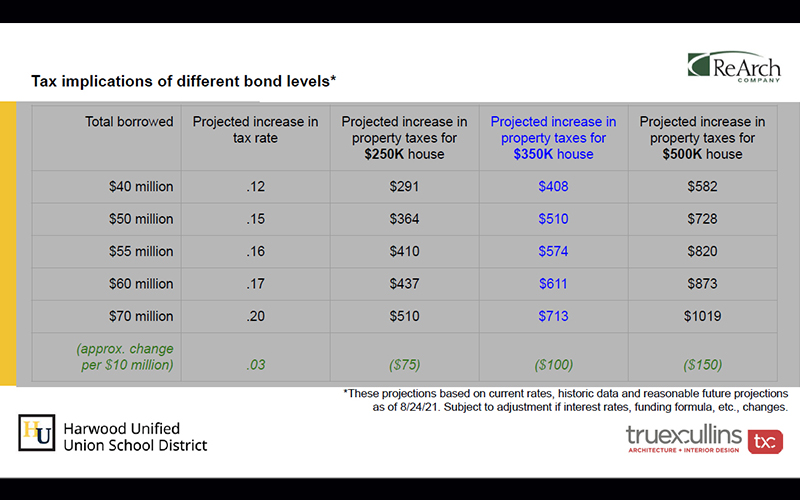 The Harwood Unified Union School District board (HUUSD) along with Harwood Union High School and Crossett Brook Middle School principals, discussed the proposed details of a $59.5 million bond at its meeting this week. Discussions around a bond have been occurring since 2015, though were put on hold when the district merged in 2016 as a result of Act 46. The bond would include repairs and infrastructure improvements to Harwood Union High School, as well as expansion of Crossett Brook Middle School to accommodate moving Harwood Middle seventh- and eight-graders to the CBMS building.

Of that $59.5 million, $53.5 million is slated for Harwood Union and $6 million is allocated for expanding and upgrading Crossett Brook.

At the August 24 meeting, the board discussed how the Harwood project is broken down into the following categories: repairs and compliance, efficiencies and improvements, and 21st-Century educational alignment. The building was constructed in 1965 and has undergone limited upgrades since then. Director of facilities and operations Ray Daigle outlined the necessary repairs, including roof repair, HVAC and duct work, plumbing, window replacement, lighting, stormwater improvement, parking lot repaving and security improvements such as additional lighting in the parking lot. The plan also includes a second gym and new track, as well as increasing parking. Architect David Epstein of TruexCullins presented a plan for these improvements.

“The facility is not equipped to facilitate our mission of a 21st-Century learning environment,” Harwood co-principal Laurie Greenberg said. The proposed plan would add new common areas, intentional community dialogue spaces, a ninth-grade team space and a wellness center, in addition to making improvements to classrooms, such as adding natural light. She cited the need for spaces more conducive to social-emotional learning, the need for welcoming spaces, repairing moldy, decaying and leaking infrastructure, replacing 1960s institutional fluorescent lighting and improving access to fresh air. The plan “will invite students to feel at home in the building,” she said, and instill a “sense of pride in the community.” She added that the changes would “ensure access for all to robust programming” and “encourage teacher-student collaboration…This will draw people to our communities.”

The proposed changes to the Harwood building come with an estimated price tag of $53,512,645. That breaks down to $21,934,081 for repairs and compliance, $14,343,440 for efficiencies and improvements, and $17,235,124 for educational alignment, which includes a new gym and track. One board member raised the question of whether federal funds could be used for HVAC improvements and was told that is under consideration, while 20% of the $3.1 million the district expects to receive from ARPA funds needs to be allocated to social-emotional learning needs.

New student representatives Maisie Franke and Maddie Thibault echoed the need for improvements to the building, telling stories of having to step around buckets in hallways placed to catch leaks, bathrooms in disrepair and potential health hazards. With limited gym space, Franke also mentioned how hard it is to get the necessary PE credits. Greenberg said Harwood is one of the few schools in Vermont with only one gym, which limits the school’s capacity to grow and meet the needs of its students. “There’s an immediate need” for the proposed improvements, Franke said. A third student representative was not present.

The plan also includes expansion and improvements to Crossett Brook Middle School to accommodate a merger with Harwood Middle School, bringing Harwood seventh- and eighth-graders to the newly-expanded building, which includes a new team space, academic and student spaces and community gathering and learning spaces. Those additions would cost an estimated $6,032,666. Harwood Middle School students would be moved to Crossett Brook by the fall 2023, with the project to be completed by 2025, if the bond passes. CBMS will need additional space to accommodate the 100 students and 15 staff moving from HUMS.

The board will share its thoughts on the project at the September 8 meeting with the hope they will be ready to finalize the scope of the bond on September 15 to warn for the November 2 election.

Board vice chair Tim Jones, Fayston, said: “We obviously have a lot of work to do in the next few weeks…this is a project I feel comfortable selling.” Lisa Mason, Moretown representative to the board, expressed some concern about bringing such a hefty price tag in front of the community but also said, “I think this is a really great plan and I’m ready to sell it, too.”

The board approved a community engagement plan that would include a community survey, community meetings, a possible informational video, targeted outreach, and media outreach.