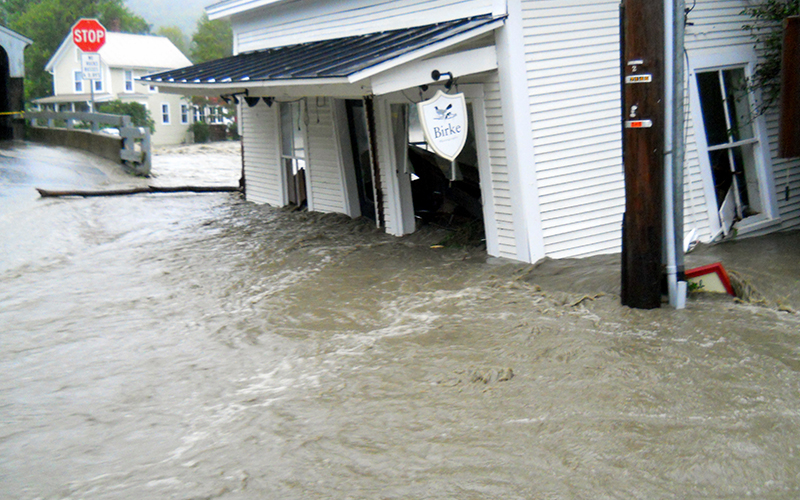 In the initial days, weeks and months after Tropical Storm Irene walloped The Valley and Vermont on August 28, 2011, the emphasis was on cleanup, road repairs and rebuilding what could be rebuilt.

When the most immediate work had been completed, local leaders and organizations began looking at longer-term implications of larger, more frequent extreme weather events. That led to increased focus on mitigating the impacts of flooding by focusing on flood resiliency, stormwater management and other issues.

The Mad River Valley Planning District and Friends of the Mad River developed longer-term recovery programs and began working on them.

The planning district received a Smart Growth Implementation Grant which articulated four areas where work needed to be done to build flood resilience. Corrie Miller, the current executive director of Friends of the Mad River (FMR), joined the organization in 2014 and has worked through a lot of the local river advocacy group’s work since then.

She explained that one of the first areas identified was protecting vulnerable areas in areas like Warren and Waitsfield villages. Another was avoiding new development in fluvial hazard zones – not putting buildings in vulnerable areas.

In 2015, Miller and 20 other Valley leaders attended a two-day summit put on by Vermont Senator Patrick Leahy which led to the creation of the Ridge to River project. Ridge to River received a $50,000 High Meadows Fund grant and began working on ways to address flood resilience from the top down, or from the ridge to the river. A select board and planning commission member from Warren, Waitsfield, Fayston, Moretown and Duxbury participated in Ridge to River.

“Those folks hired several consultants to do analyses. Stone Environmental did some work that we put into an action framework, and we held three community forums to chart our path forward,” Miller said.

A significant part of that work involves looking at ways to slow down the flow of water and stormwater so more can be absorbed into the ground, reducing the volume of water that will hit the river during a flood event. Managing stormwater on asphalt and other built spaces but also around individual homes and properties is critical to that process.

“Since that was developed in 2017, we’ve been chipping away at the pieces of the action framework. There were some big learning ‘ah ha’ moments that came out of our work, specifically about the impacts of forest cover loss and road networks in terms of understand our watershed and some of our vulnerabilities,” Miller recalled.

For example, the Warren School has a rain garden and underground stormwater chamber. Fuller Hill and several other roads in Warren have had work done to improve stormwater management. Work has been done at Harwood Union as well.

Another important offshoot of Ridge to River has been road department roundtables where local road crews and select board members get together regularly to discuss and understand the challenges they face.

“They share ideas, experiences and resources. They had to slow down a little bit in the pandemic, but that has been a really important aspect,” Miller explained.

FMR also launched a Storm Smart program where staff visit individual homes in The Valley to help homeowners figure out how to slow the flow of stormwater out onto roads and smaller streams. FMR staff point out places where vegetation, road grade, culverts and even things like rain barrels can help slow the water. Over 150 homes have been assessed and assisted.

FMR has worked with other organizations to replace five local culverts with larger culverts, but has also worked to re-align those culverts to better facilitate fish moving upstream. Increasing, with weather patterns changing and river waters gaining heat, fish need to get to the cooler upstream tributaries to survive. Excluding the culvert work, FMR, Ridge to River and the planning district have brought $850,000 into The Valley for flood resiliency work.

All of this work is pre-emptive rather than reacting to a flood event and that is something that FMR and other organizations want to foster.

“How can towns institutionalize water into their thinking? We all understand that this is a challenge – nature-based solutions and reducing the erosive power of water. We’re in that shift to that new thinking right now and helping engage select boards, ski areas and schools in that work,” Miller said.

“That’s been part of the exciting thing. People are starting to shift their thinking. It’s not just about what happens along the river corridor. It’s what happens from the ridge to the river. It’s a huge mind shift. It’s harder to think about your lawn!” she pointed out.

“We can create homegrown national parks on our own properties. We can do things to build resilience and foster bio-diversity. We don’t often think about our roles as homesite owners,” she added.

The next challenge, Miller said, is learning to think about stormwater as a utility that is part of the planning and development process for villages and concentrated development areas.

For FMR as it pivots toward the lens of climate in all of its work, there’s an understanding that people know things now that they didn’t know 40 years ago and work is moving forward with an awareness of those facts.

Miller is impressed by what a small community like the Mad River Valley did in coming together to help each other after Tropical Storm Irene and how people pulled together in the face of a disaster.

“We need to think about every choice we make as an opportunity to build resilience into our lives. Every single decision we’re making now adds up collectively across the watershed. If we could bring that same kind of energy that we brought to Irene it would be really powerful. We could work together in the collective spirit not in the face of a disaster like Irene, but in the face of opportunity, it would make a difference,” she added.