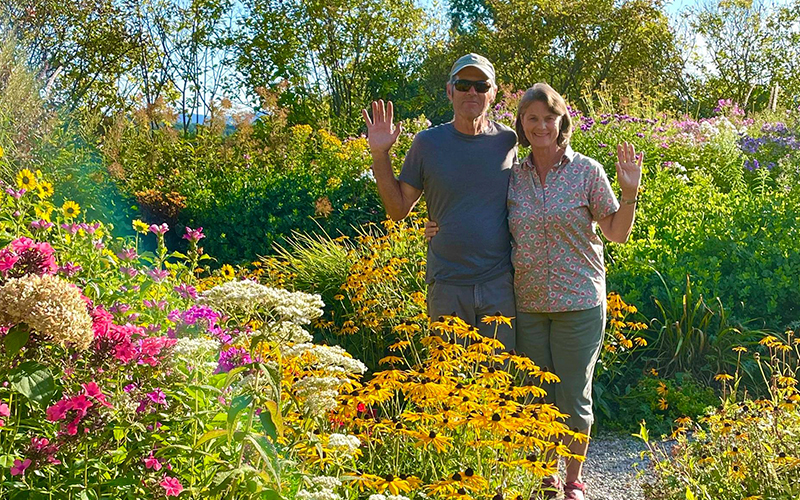 After 41 years, Sally and Tobi von Trapp are transitioning from working more than full-time at their Waitsfield Common business with its six greenhouses and 12,600 square feet of greenhouse space.

They closed the von Trapp Greenhouse on Labor Day this year.

“We thought if we built it, they would come – and they did,” Sallie said.

For the first 10 years Tobi had a 2-acre vegetable garden, selling bulk vegetables to local restaurants. After that they shifted to cut flowers. Over the years, they watched people’s buying habits change, initially they sold mostly annuals in six-packs, Tobi said, but then that shifted to perennials and mostly recently people have been keen on 4.5-inch pots of annuals for container gardening.

Although their retail business is closing they won’t completely stop getting their hands dirty. Tobi will continue his various hybridizing projects. He’s currently very engaged with hybridizing anemones and that work will continue. They will keep one employee on board. They will have a Mother’s Day hanging basket sale and may likely have various pop-up sales as community fundraisers.

“We’re not really done, but we’re dialing it back by at least half. I love doing what I do, but I’m not going to accelerate my demise,” Tobi said.

“I’ll continue to develop these amazing varieties of anemones and will ramp up production of those, but I’ll only need to be in the greenhouse watering them for two to three hours a day as opposed to 10 to 12 hours a day so I’ll be able to go skiing,” he said.

Both have enjoyed their first few days away from the hustle of the retail business. Sally said one day this week she went outside after breakfast and sat on the porch with a cup of tea and enjoyed her own flower gardens. Tobi said he’s been getting up a little later and taking a meditative 30 minutes to play the guitar before heading to the anemone greenhouse.

When they announced they were closing the business they heard from customers and clients from throughout the Northeast who let them know how much they’d enjoyed their annual pilgrimages to the greenhouse to buy flowers and veggie starts.

“I had one person say to me ‘you know, you’ve changed the whole look of The Valley,’” Sally said.

“We had so many accolades from so many people. It was so nice. I’ll miss the interaction with people who’ve been coming here for as long as we’ve been open. A woman from Stowe told me that her annual visit was her favorite day of the year, that she planned all spring long for what she wanted to plant. It’s like Christmas for her. She said she’d really miss it. When you hear this from people, you realize that these connections build relationships over the years, the interactions mark the season for people and they’re 99% positive,” Tobi said.

Sally said she would miss the enthusiasm of the customers and miss helping people discovery new varieties and resolve problems.

“We liked that aspect of teaching and helping, but the intense workload really needed to be reduced,” she said.

In addition to being less tethered to the business, they’re looking forward to being able to visit their daughter in France and their son in Greece. Their daughter, Emily, lives in Waitsfield and has her own flower business. She’s been sharing space with them and will now take over more of the greenhouse space.