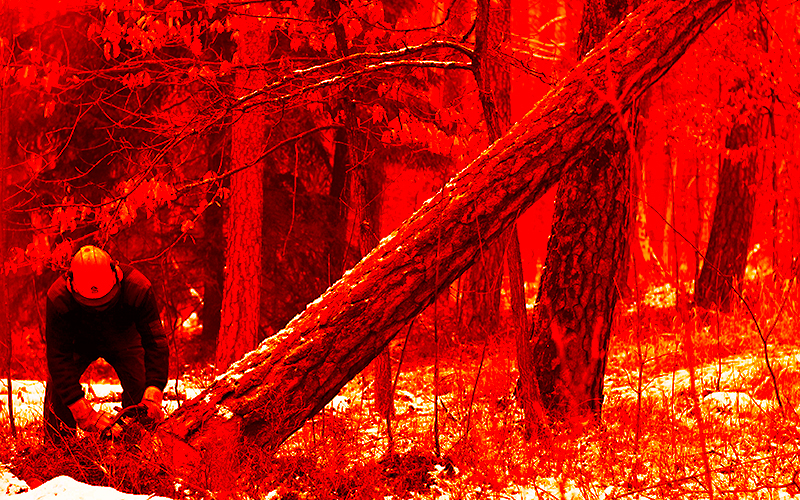 The Washington County state forester and others are urging people to use caution in hiring timber harvesters after receiving a series of complaints about loggers failing to follow acceptable timber management practices.

Robert Nelson, the Washington County forester for the Vermont Department of Forests, Parks and Recreation, reached out to The Valley Reporter to share information with the community, particularly people in the Center and North Fayston Road areas where a number of complaints have been received that involve timber harvesting that is not done properly or that involves trespass, disregard for landowners’ wishes and concerns about natural resource protection.

“If people are being approached by a timber harvesting operator, before agreeing to anything, they need to stop and gather as much information as they can before they make any decisions about that operator. We encourage them to gather information from us, from me and from a consulting forester,” Nelson said.

Nelson said that some of the complaints and concerns he and his colleagues had heard had to do with water quality issues around stream buffers and stream crossings. His colleague, Rick Dyer, acceptable management practices forester, said there had been several issues with water quality where timber harvesting had been undertaken in Fayston this spring and summer.

“I did complaints about water equality issues on a harvest that one timber harvester was conducting. The complaint was about logging debris and slash in the stream channel which is a violation of water quality laws,” Dyer said.

He made a site visit and worked with the timber harvester on a directive to correct the problem- in this instance pulling the debris out of the stream channel. Dyer said he’d done one post visit inspection to make sure the work was being done and has another one scheduled.

“I can’t advocate enough for landowners to hire foresters before signing contracts with timber harvesters. Most of the complaints I respond to are regarding logging issues where timber harvests happen without a forest. There is also information on the forests, parks and recreation website. If a logger knocks on your door, take the business card and say, ‘I’ll talk to my forester and get back to you.’ Talk to your friends and neighbors as well. That’s the message. Don’t just turn a logger loose in your woods,” Dyer said.

Beyond doing the due diligence that Dyer suggested, Nelson said people should maintain a presence on their property while timber is being harvested, make sure boundaries are clearly marked, preferably with paint and make sure their neighbors are around if they can’t be.

“This pattern of activity has all been centered around this area of Fayston. People need to protect themselves and use a forester to oversee a timber contract for sale and harvest and make sure nothing is done without workers’ comp and liability insurance. As with any business, the most reputable operators tend to have a lot of work in front of them and are scheduling quite aways out. If someone just shows up at your door asking to cut your timber, that’s a red flag right off,” Nelson said.

He noted that he is available to consult with Washington County residents about timber and logging and provide guidance, information and help with understand resources available at the state level. His phone number is 802-636-7203.

Vermont Department of Forests, Parks and Recreation commissioner Mike Snyder said he was aware that there had been issues in Fayston recently, but said he wasn’t aware that charges beyond the water quality issue had been raised.

“I’m eager to hear more from the landowners involved. We take this very seriously. It’s not okay in so many ways. And it’s not the norm, nor should it be. I’d like to hear from the aggrieved folks,” he said.

Snyder said that a big part of the forests, parks and recreation work is education – as well as legislative change. Additionally,

orests, parks and recreation has created a program to work with realtors so that when people are buying properties with timber holdings, they can start out with at least some information.

“Realtors are the first line of defense. If someone buys a house and it comes with 70 acres of forest land, there’s no owner’s manual. If you get someone knocking on your door offering to cut your back 40 acres you have to make sure you’ve got a professional and a legally binding contract that protects both parties. There’s a lot at stake in your woods and all of us benefit from others stewarding tracts of forests,” he said.