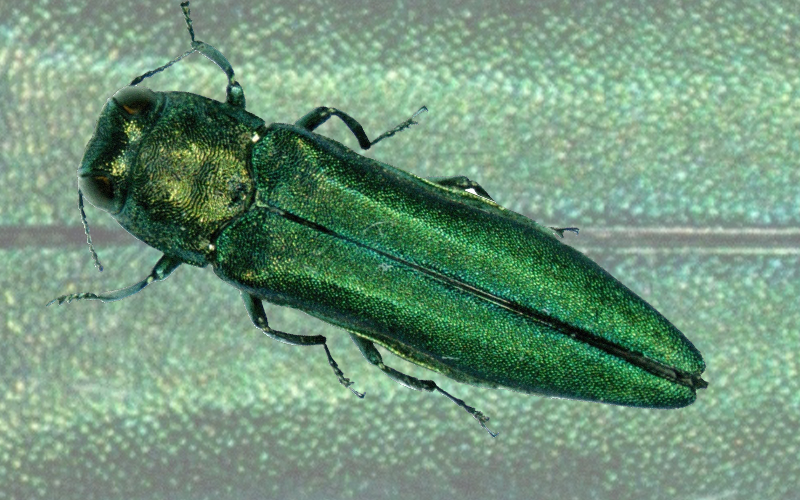 Waitsfield has 2,037 ash trees along 17 of its 22 miles of roads. Those ash trees (along with all ash trees in The Valley) are vulnerable to the emerald ash borer (EAB) a small metallic-green beetle native to southeast Asia and now found in North America.

The beetles kill ash trees by defoliating them and laying eggs under the bark. The larvae of the beetle girdle the bark and kill the tree by cutting off the flow of nutrients up and down the tree.

The beetle was first found in Vermont in 2018 and is now found in all but two Vermont counties. The EAB has not yet been found in Waitsfield, but given its presence in surrounding town, it can be expected within the next few years.

Waitsfield – and all Vermont -- towns are being asked to create and fund management plans for how to address the issue and the Waitsfield Select Board started that task this week on October 11 by meeting with Ashley Andrews of the Central Vermont Regional Planning Commission who walked the board through an inventory of the town’s ash trees and laid out several mitigation strategies.

Andrews was joined at the meeting by Jeff Cueto from East Montpelier who helped that town develop a plan for addressing its public ash trees. 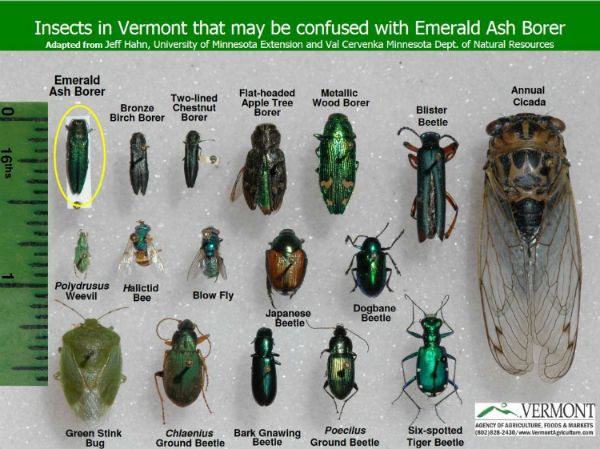 Andrews told the board that towns can consider three options for managing the ash trees: pre-emptive, selective and reactive. Pre-emptive action calls for removing trees prior to EAB infestation and replacing them with trees that do not host EABs. This allows towns to spread the cost of removal over a longer time frame and lets towns start the replanting process right of way plus the ash wood can be used for firewood and other wood products. But this also has negative impacts on the aesthetics of removing the tree canopy which can create negative feelings in the community and it also doesn’t consider the possibility that research may find an effective EAB treatment.

Selective management calls for protecting high-value ash trees while letting those in woodlands and parks remain unmanaged (and likely to die from EAB). This requires regular monitoring of the trees and their levels of EAB infestation as well as the use of an insecticide treatment and removal. This may save high-value trees, the board was told, but there are many questions about the efficacy of any insecticidal treatment. This approach also allows towns to recoup timber value and spread the cost of removal/monitoring over time.

Reactive management treats ash trees like all other trees in town ROWs, removing hazard trees as issues arise, including EAB infestation. The budget impacts of this can be considerable and a town’s ability to replant may be hampered by the high costs of removing infested trees all at once.

“We’ve used a blend of those three approaches,” Cueto told the board. He said that over the last two summers his town received grants and matching grants to implement its ash tree management plan.

“We believed that the risk for ash tree loss was pretty high based on the information available,” he said, explaining that the town removed 267 trees under its first grant and held public hearings about removing trees in town ROWs. Additionally, the town worked neighborhood by neighborhood interacting with individual property owners with ash trees on their properties. Another 50 trees were removed this summer.

“We recommended that the town continue its pre-emptive approach and plan to spend $20,000-$25,000 a year on tree removal and management,” he added and said that five ash trees were identified as ‘exceptional’ and the town entered into an agreement with the city of Montpelier to treat those five trees every other year for $700.

Cueto said the work focused on the larger trees, leaving the smaller trees uncut because they’ll likely die before they are big enough to be a significant risk to public safety.

Cueto and Andrews were peppered with questions from the board and Charlie Hosford who is chair of the town’s tree board.

Hosford said that removing the ash trees in front of the elementary school would leave that area vacant and said several years ago he received a quote to remove every other ash tree in front of the school, grind the stumps and plant new ones.

“It was a pretty steep price. If you just plant 2- 3-inch trees it’s not going to grow very fast. We had $8,000-$9,000 in the tree reserve fund and we used it to plant four to five new street trees every year but we haven’t done that for about five years,” Hosford said.

Board member Brian Shupe asked about grants through the state’s urban and community forest program and Andrews said she knew that grants had been available but didn’t know if they still were.

“I heard that if you get a plan together, that there’s money available,” Shupe said.

Hosford told him that there were funds available in 2016 but those were matching grants.

Board member Chach Curtis asked if Green Mountain Power or Washington Electric Co-op had an active plan and Andres said they did and had been removing ash trees from ROWs for three to four years.

Cueto was asked about the $700 cost of inoculating the five high-value ash trees in his town and confirmed that that was the price. Hosford said his discussions with arborists led him to believe that inoculation of green ash trees is not worth it.

“At what point does the wood become unusable?” Hosford asked.

“When it becomes the consistency of Styrofoam and is no longer safe to remove,” Andrews responded.

Infected ash wood cannot be taken out of state or out of the town it is in, she noted.

“Was there any public interest in the wait and see approach?” Hosford asked Cueto who said that during public outreach, most townspeople were sympathetic to the risk to public safety and very few advocated to wait and see.

“You seem to have a higher density of ash trees on your roads. We have 62 miles of roads and 2,400 ash trees 6 inches or bigger. You don’t have that much road and you have almost the same number of ash trees,” Cueto said.

Cueto said the cost to remove the trees is roughly $100 a tree and said his town was being proactive in cutting the trees anticipatiNG greater demand and more competition for arborists’ work as the spread continues.

“How long does it take from infestation until the tree is Styrofoam and unsafe to remove,” Curtis asked.

Cueto said it takes a couple of years and said his experience is that it’s not apparent initially that a tree is infested until after the canopy has been destroyed.

Board chair Christine Sullivan suggested that the town needs a longer-range plan and community outreach and engagement with the public about how to mitigate the impact and Shupe pointed out that at least some members of the select board should be involved with the tree board on planning how to address the issue.