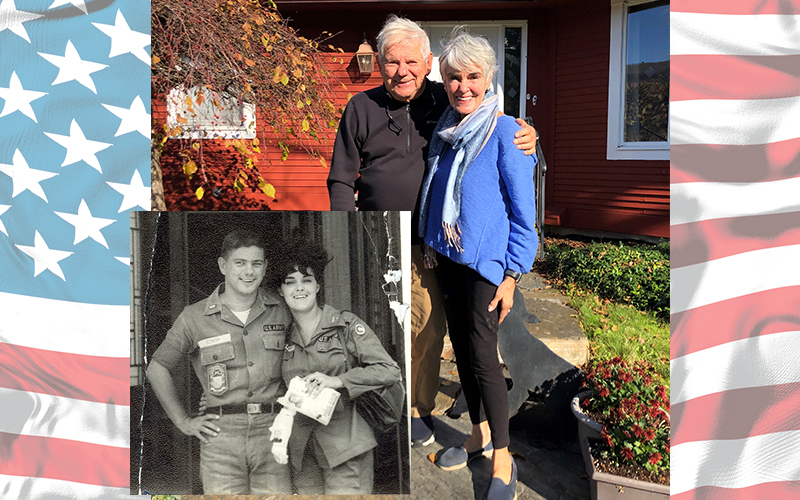 Tom and Polly Bednash had both volunteered to serve in Vietnam when they met there in March, 1966, in Vung Tau where Polly was in the Army Nurse Corps and Tom was a Signal Corps officer in the 36th signal battalion.

Polly, a native of Texas, and Tom, a native of Pennsylvania, met in the bachelors’ officer quarters where Tom said the best food was to be had and where all the nurses ate there as a result.

Polly joined the Army while in college through a program that covered the costs of her final two years of school and also paid her as a private first class for a year and a half and then, six months before she graduated, she was commissioned as a second lieutenant. Upon graduation in 1965, she owed the Army three years of military service.

She did her basic training at Fort Sam Houston in San Antonio and was then stationed at Fort Belvoire, VA, at the military hospital there.

“After six months, I volunteered to go to Vietnam. I was an operating room and ER nurse it felt like that’s the place I needed to be,” she said, when interviewed at their Waitsfield home on a sunny Friday afternoon.

Tom had been in ROTC while he was in college studying electrical engineering.

“I always wanted to do my service in the military and once I started college, I thought ROTC would be a good fit for me,” he said.

When he graduated from the University of Detroit, he had a 6.5-year commitment to serve in the reserves and also a voluntary two year obligation to serve and he chose to serve in Vietnam. He had already started working at IBM in Owego, New York, when he activated and did his basic training at Fort Gordon, GA, before shipping to Vietnam, arriving a few months before Polly arrived.

Once Tom arrived, the mission was to provide all the telephone communications for the Allied Forces in Vietnam. He and his crew installed 21 signal installations all over South Vietnam.

“We did the entire country,” he said and explained that he had to fly around the country checking the installations with regularity and because he was also the mess officer, motor officer, supply officer and pay officer, he had to visit each sight once a month to pay the troops. To that end, he’d catch a flight in any plane or helicopter that was available at the moment, flying in Beavers, Otters, C130s, C123s and UH1Ds.

Nursing at that time, Polly said, was somewhat primitive with care provided in 10 long Quonset huts with folding cots and air mattresses for the injured. The narcotic box was an empty ammo box secured with a padlock.

She and her colleagues were treating soldiers who would return to combat as soon as they were ready. The more gravely injured soldiers were sent to Japan. There was no air conditioning, only fans and mosquito netting. In addition to battle wounds, the nurses were treating a lot of malaria and hepatitis A. Soldiers had large bottles of quinine to take to prevent malaria, but many did not take it.

Tom’s tour of duty ended before Polly’s and he returned stateside. When she returned, she flew to Texas to see her family and then to Pennsylvania to meet his family. She was stationed near Philly at the Valley Forge military hospital.

They got married in June 1967 and Polly worked at Valley Forge until March 1968 when she became pregnant and per military protocols at the time, she was given an honorable discharge. Tom had returned to his job at IBM after returning from Vietnam.

Asked how it was to have met in a war zone- admittedly a difficult place – but an experience that led to 54 years of marriage, both said they try not to think about that too much.

“It was tough. There were people we knew who were lost. I got to know the medivac pilots pretty well and some didn’t come back. And you’d see these kids who were wounded and you’re patching them up to send them back out again. It was difficult,” Polly recalled.

“I was a very angry young man when I got out. I was very, very upset with the status quo in the United States. The only people that gave a hoot about what was going on in Vietnam were friends and families of those of us who were there,” Tom said.

“It was like it didn’t exist for them,” Polly said.

Over the years, as their second son was born, and they were very engaged in their careers, that anger faded, they said.

Polly worked as a nurse in Owego, transitioning to teaching nursing, something she continued when the family moved to Virginia where she got a master’s degree then did a Robert Woods Johnson fellowship to become a nurse practitioner. She continued to teach at George Mason University while practicing in a family practice.

She pursued and got a doctoral degree and when her tenure clock was running out at the university, her dean suggested she leave for a short while and come back to reset that clock.

“I left and went to work for the American Association of Colleges of Nursing, a nonprofit that represents colleges and universities that have BA nursing programs. I worked as a director of governmental affairs. When my boss left, I applied for her position and became head of the organization for 28 years,” Polly said.

Although she officially retired in 2014, she remains on several boards and is still a consulting professor at several institutions.

Tom stayed on at IBM until he retired in 1998 at 58 and Polly surprised him with pottery classes two days after he retired. He was astonished and protested that he couldn’t untangle all the cobwebs in his mind after 36 years of IBM. She told him he’d better untangle them quickly, launching him on a very successful second career as a potter who creates colorful, functional pieces in his studio in Waitsfield. He exhibits and sells those at craft fairs, including the Valley Players Craft Fair and the Artists Weekend in Waterbury.

After that first class in 1998, he called Polly and told her he loved it, and he hasn’t looked back since.

“Working with clay is almost a spiritual experience. It’s very relaxing. After that first class, I was hooked,” he said.

And how did they end up in The Valley? Skiing, of course! Shortly after they returned to the states, Polly went to visit Tom.

“He said ‘I love you. I’ve missed you. We’re going skiing’,” Polly recalled. He bought her gear, they boarded a bus and went to Killington. There Polly -- a Texas native -- was confounded when other skiers told her to make her feet into a snowplow. She learned to ski and the family became Mad River Glen skiers, starting out renting at Sugarbush, then purchasing a Battleground townhouse before buying their current home 11 years ago.

Their older son lives in California and their younger son moved to Warren a few years back with his family. Their granddaughters go to Harwood.

Tom and Polly spent the pandemic in Vermont but still have a home in Virginia.