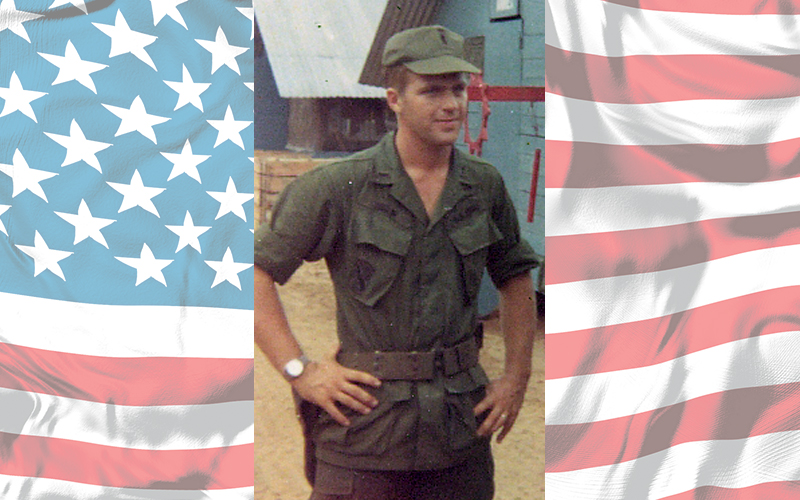 Joslin was born on March 6, 1946, in Heaton Hospital in Montpelier. He spent most of his life in Vermont, where he completed Montpelier High School in 1964 and graduated from the University of Vermont in 1968.

“I was drafted the next day,” said Joslin. He was in service with the United States military for from 1968 to 1971. Following his service, he attended Albany Law School with his brother, Peter, and graduated in 1975.

Joslin was at Fort Dix in New Jersey for eight weeks of basic training and an additional eight weeks for advanced training. “You don’t ask too many things,” he said. “They line you up and shoot you up with every vaccine they want.”

Following his time in Georgia, Joslin was reassigned to Fort Dix. Typically, he would have gone to become a training officer, but since he had been admitted to law school before going into service, Joslin was assigned to Courts and Boards. He ended up becoming an Army lawyer, defending people in special court martials. These were mainly soldiers who had gone AWOL, and Joslin spent half his time in the stockade and the other half in defense until this three-month period lapsed and he was drafted to Vietnam.

Joslin returned to Fort Benning for a weeklong training and then was shuttled south to Panama, where he spent two weeks in the Jungle Operations Training Center, becoming versed in the language of jungle warfare, learning how to rappel down waterfalls and safely consume sea creatures. When his time in Panama came to a close, he was flown back to the states and then across the Pacific to Vietnam.

He arrived in Chu Lai in January of 1970, and joined the I Corp. The I Corp operated in the northernmost section of South Vietnam, bordering North Vietnam at the Vietnamese Demilitarized Zone. Joslin was part of the 198th Brigade in the 23rd Infantry Division, also known as the “America” division, which was only in service when engaged in active war.

Joslin was in I Corp from January to December of 1970. “I made it [out] in one piece, but a number of people in my company did not,” said Joslin. “Usually, we would be shipped out in helicopters and [sent] out on different missions.”

Early on in one of these missions, Joslin’s crew was hit by their own artillery. A platoon sergeant, a radio man and two other men were killed, and one more lost his leg. “Some of this stuff feels like yesterday,” said Joslin. “You close your eyes and it’s there. You don’t get over that stuff. Whenever you hear a bang, or a noise, or a pop, you get jumpy. Every day of the week I think of those that didn’t come back. You never stop asking, why did the other person get hit and not me?”

“It wasn’t a great time, but we went on through and, fortunately, with my platoon we didn’t end up losing many other people. It was a messy war,” said Joslin. “Tons of local men from The Valley went into service one way or another and, you know, a number didn’t make it out.”

“There were racial overtones, too,” said Joslin. You could defer drafting, but “a lot of Black people didn’t have much of a choice, they got shipped over there. It was a tough time.”

Joslin’s older brother, Peter, was in the Air Force. He spent time in Okinawa as a radar controller, managing tensions there with Koreans and keeping track of things on Hanbando. Following that, he returned to the U.S.

After Christmas 1970, Joslin came back to the United States. He still had time in service, so he was sent back to Fort Dix and was reassigned to Courts and Boards. He stayed at Fort Dix with his wife for three and a half months, eventually returning to Vermont. Then, he began law school in Albany, New York.

“I take with me that life’s important,” he said. “I just say, enjoy each moment because life is short and it can easily be taken away. When you’re in a foxhole and it’s pouring with a poncho over your head in the middle of the jungle, I think, this is where I’m at.”