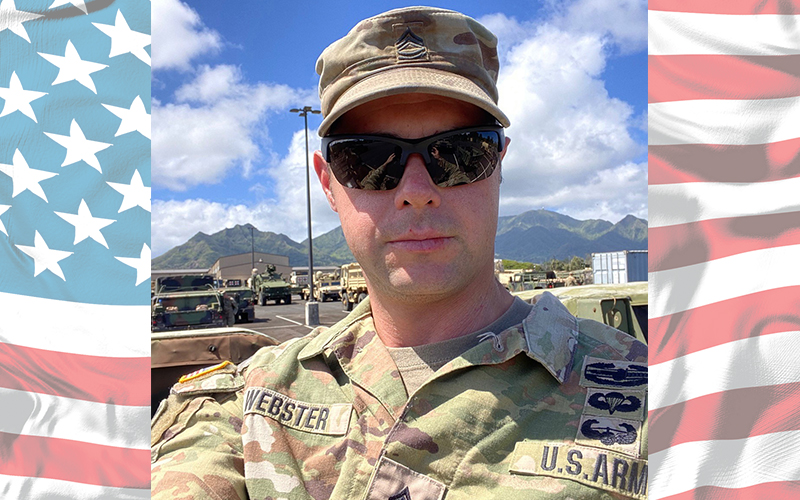 Justin Webster has been in the military for 18 years. He began in the military police and has served in Iraq (September 2006-December 2007), Afghanistan (May 2011-February 2012), Belgium, Germany, Colorado, Missouri and Fort Drum, New York. He has also been a drill sergeant and platoon sergeant in his two decades of service. He is now an observer controller trainer at Fort Polk, Louisiana, where he’s served for about a year, training units to prepare for combat.

Webster grew up in Waitsfield, Warren, Duxbury and Waterbury and graduated from Harwood Union High School in 2003. He credits his dad with encouraging him to join the military. He and a friend were talking on his porch their senior year of high school about considering joining the military and, the next morning, his dad woke him up and drove him to the recruiter’s office. “I thank him every day for doing it,” he said. “I had absolutely no idea what I was getting myself into, but looking back, I wouldn’t change it for anything.”

Webster called military service “an awesome opportunity to do something that is well outside of your comfort zone. I’m very proud of what we do. I’m proud of being a leader and having people look up to me and seek me out for advice.” He’s stayed in touch with people he’s trained and worked with over the years. “Some of the closest friends I’ve ever had in my entire life are because of the military.”

“I’ve grown a lot as a person” through his service, he said. “I credit the structure that the military provides for you. I’m definitely the kind of person that needs that. It keeps you grounded and keeps you on task and focused on what matters.”

“Being a drill sergeant was one of the more challenging assignments I’ve had, but at the same time, one of the more rewarding experiences I’ve had. To be able to take 200-plus civilians and train them and teach them how to be in the Army and the values and ethics we instill and then watching them go from a knucklehead kid right out of high school or somebody who just kind of went off their path … to turn them into a soldier and watch them on their stage on graduation day, it’s pretty prideful … I had the privilege of when I came off being a drill sergeant I went to be a platoon sergeant and I had soldiers in my platoon that [I had trained] and I got to watch them grow and turn into leaders … it’s very rewarding.”

He said his old unit, 23rd MP Co. out of Fort Drum, was sent to Afghanistan when American troops pulled out of the country this fall. When asked about current perception of the military, he said, “I think there’s a lot of things people can misinterpret. It’s easy to take things out of context. Unless you’ve actually done it, been some of these places and done some of these things, you’re not going to have a clear outlook.”

Though he’s eligible to retire in two years, he plans on staying in the military for the foreseeable future. “I’m not ready to be done,” he said. “I’m very appreciative of everybody who’s served before me and will serve in the future. I think it’s a great opportunity and I wouldn’t trade it for the world.”