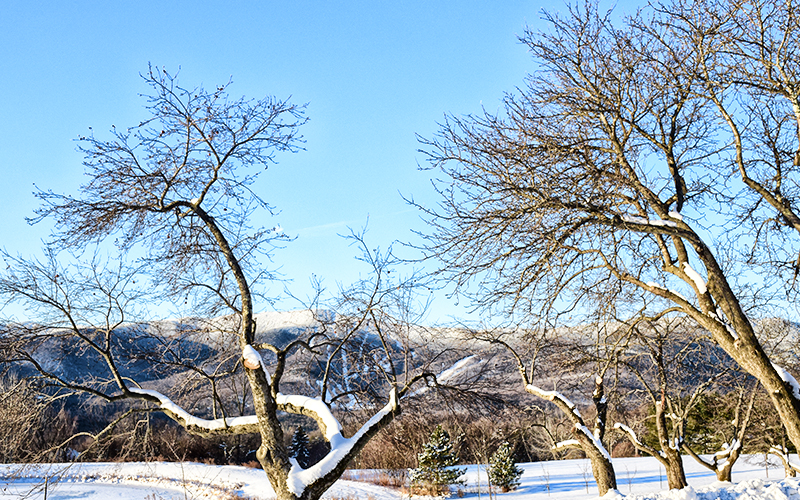 Mad River Glen and Sugarbush are expecting a lot of pent-up demand for what winter has to offer in the Mad River Valley, according to resort leadership.

Mad River Glen’s general manager Matt Lillard and Sugarbush’s COO John Hammond along with Sean Kramer from the 1824 House and Eric Friedman, executive director of the Mad River Valley Chamber of Commerce, had a community conversation that was lived streamed by Mad River Valley Television on November 10.

Both Sugarbush and Mad River Glen will be requiring guests to wear masks inside their facilities except when they are eating or drinking. Both resorts are allowing guests to boot up inside this year and bring their gear bags. Sugarbush will be requiring people to keep their gear bags on the lowest floors of the lodges at Lincoln Peak and Mount Ellen.

“We plan to open next weekend, although the forecast for snowmaking is dicey. We’ll open with the Valley House and Gate House lifts,” Hammond said.

Hammond also explained that Sugarbush would be using the Sugarbush Inn for employee housing and said resort staff had also been working with state officials on creating a public COVID testing facility at the Sugarbush Inn.

“We’re trying to get a PCR testing clinic set up at the drive-around area of the Sugarbush Inn. Right now, people are either going to Waterbury for tests or if not there, Berlin. We really feel that if we can get that done, it’s a good community service,” Hammond said.

Sugarbush and Mad River Glen are requiring staff to be vaccinated and regular testing will take place as well. There are some jobs at Sugarbush where vaccine exceptions for religious or other reasons will not be accepted, including ski school, the rental shop, ski patrol and for employee housing.  Lillard and Hammond said current vaccinations numbers are high among employees.

“We’re 100% vaccinated. Our food and beverage staff will be getting tested throughout the year; I will and my kids are tested at school on Mondays. It will be part of what we do,” Lillard said.

Hammond said Sugarbush will be extending a policy of offering 80 hours of sick leave for COVID and Lillard said Mad River will follow a similar policy.

Both resorts will be loading the lifts in a normal fashion this year. Sugarbush will be keeping the same lift line configurations it used last year, but without the ghost lanes. Mad River Glen will have hosted seating in the restaurant and pub to avoid having people three-deep at the bar. Mad River Glen also has a new outside pub window that will be fully operational this year.

Kramer said it was helpful for inn and lodge owners to understand how ski areas planned to operate so that they could keep their guests informed.

Asked about the impact of having no Canadian visitors last year, Lillard said that lack of Canadians paled in comparison with the lack of out-of-state skiers who could not come to Vermont last. Year due to the travel restrictions and Hammond concurred.

Asked what operational changes that came from last year’s COVID protocols would be continued this ski season, Lillard talked about Mad River Glen’s restriction of season pass sales last year as well as limiting the number of day tickets sold and explained that those things so significantly improved the skier experience that they’re being carried forward. He said the resort reduced the number of seasons passes available this year by 10%. Those passes sold out in September.

“The response has been overwhelmingly that people are ready to come back and want to be outside skiing and recreating. I think that’s going to be good for The Valley,” he said.

At Sugarbush, Hammond said that the resort would be sticking with going cashless which worked well last year and took away the risk and liability of handling cash.

The six small private base lodge cabins that Sugarbush built and placed at Lincoln Peak will be used again – although two have been moved to Mount Ellen for the season.

As the new fully accessible Vermont Adaptive facility has been built at Mount Ellen, that base lodge has gotten a facelift with new carpet and paint, elevator access to all three floors, new bathrooms and lighting, more windows on the south side and a significantly expanded deck.

Lillard was asked about the capital campaign at Mad River Glen which allowed for significant upgrades to the resort last year; specifically, whether the resort is viable in the long term without the philanthropic giving that funded most of that work.

“The capital campaign was invaluable to Mad River. We’ll feel the benefit of that for years and years to come. It allowed a huge capital project in the base area, covered a new groomer and expanding snowmaking,” Lillard said, explaining that there are three legs to Mad River Glen’s financial stool: the operating end of things, share sales and proceeds from them and giving.

Both resorts expect and have been experiencing supply chain issues in terms of being able to order goods, particularly food and beverage. Sugarbush may reduce some menus to manage that.

Lillard and Hammond said that their ski pass to day ticket ratios are heavily skewed toward passes with Lillard estimating that Mad River has a two-thirds pass-to-ticket ratio – if not more. Hammond estimated 60-40% and said all tickets are purchased online and people pick them up at designated sites where they scan their phones and a ticket drops out.

In response to question about Sugarbush’s parent company Alterra, Hammond said that he and his staff had been working on updating the resort’s master plan with the U.S. Forest Service on a comprehensive planning going forward in terms of future development. Sugarbush operates on forest service land with a memorandum of understanding that calls for incremental review of proposed development.

“Absolutely, but we’re not ready to announce those details right now. We do have master development plans for other projects including an employee village,” he explained.

Hammond also said that the resort is interested in improving its ability to pump water for snowmaking from the base of The Valley to the top of the mountain. Sugarbush can draw unlimited water from the Mad River as long as the minimum stream flow is maintained.

“We’re working on storage options as well, ambitious new things, a new pond for storage and increased pumping. At Mount Ellen, the minimum flow is the restriction and we’re looking for more storage there,” he added.

In response to questions about climate change, reducing carbon footprints and becoming carbon neutral, Lillard pointed to how significantly the base area work done last year at Mad River Glen had changed its energy usage. He expects solar options will come to the resort soon. Mad River Glen has already partnered with Mehuron’s to buy electricity from a solar farm. He said the co-op board is working on a strategic plan to guide the resort into the future.

Hammond detailed the solar installations at the resort, noting that all the energy used at Mount Ellen is produced by solar and that a new solar field had been constructed in Parking Lot F.

Staffing remains a challenge for all local businesses and Sugarbush has managed to hire J1 and H2B visa holders to help fill jobs. He said just over 70% of open jobs had been accepted by an applicant. Lillard said he’d had a fairly sobering staff meeting earlier that day and that there were some holes to fill.

“Anybody listening who wants to spend a couple of days a week working at a ski area, we could use your help,” he said.

Housing remains an issue for all Valley businesses in hiring, including the recreation and hospitality sectors. Sugarbush does have multiple employee housing facilities which helps, Hammond said.

In response to questions from those on the Zoom call, Hammond said that Allyn’s Lodge and Walt’s Pub would be open. Lillard said that the Snack Shack would be operating this season.

Both discussed pent-up demand from their customers to get back to Vermont. Hammond said that the Sugarbush Golf Course had a record year and said weddings rebounded and that the resort is almost fully booked for weddings next year.

Both resorts will celebrate the start of the ski season together next weekend with the Big Kicker at Lincoln Peak when the resorts come together to launch winter with a bonfire, libations, music and more.