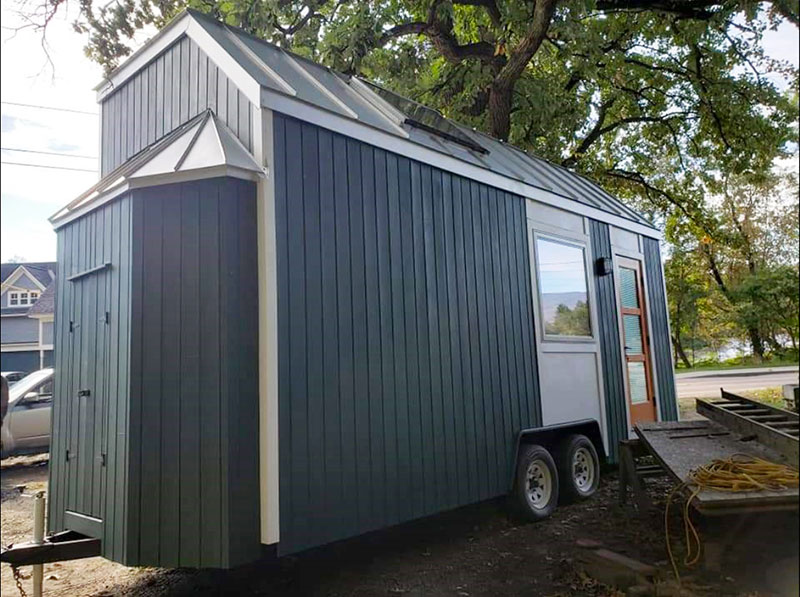 “This was a community effort and it’s a model for how people can help each other,” said Erica Stroem of the local effort to get Waitsfield resident George Pakk housed after a February 2021 chimney fire destroyed his Waitsfield Village home.

Last weekend, on Saturday, November 6, Pakk moved into his new home, a tiny house that Stroem and her sister Karin purchased with funds from a GoFundMe campaign several months after the fire. The tiny house was pretty much a shell on the interior and throughout the spring and fall volunteers worked to complete it, moving it to the site at the end of September where the final permits were obtained and the house was connected to water and wastewater.

But before that could happen, the debris from the fire had to be removed from the site and the site cleaned up. That happened this summer. A foundation of sorts was created and at the end of September, volunteers moved the house from the back of the Localfolk Smokehouse to Waitsfield Village. Once the house was on site, tiling was completed in the bathroom, installation was installed, a deck for Pakk was constructed and Pakk moved in.

“We did this on a shoestring, but we had so much help. This was a concerted effort by Vince Gauthier, Charlie Hosford, Jay Seekins, Marv Theuer and his son Evan, Brad Belknap, Ward Plumbing and others. John Morse at the Localfolk Smokehouse donated space to park and work on the tiny house as well as the electricity. The community fund and Rebecca Baruzzi helped us, the Waitsfield United Church of Christ helped. Kingsbury Construction donated time for cleanup, Bisbee’s donated 100% of what we needed from them,” she said – and noted that that is the short list of people who helped. To tally everyone would be almost impossible.