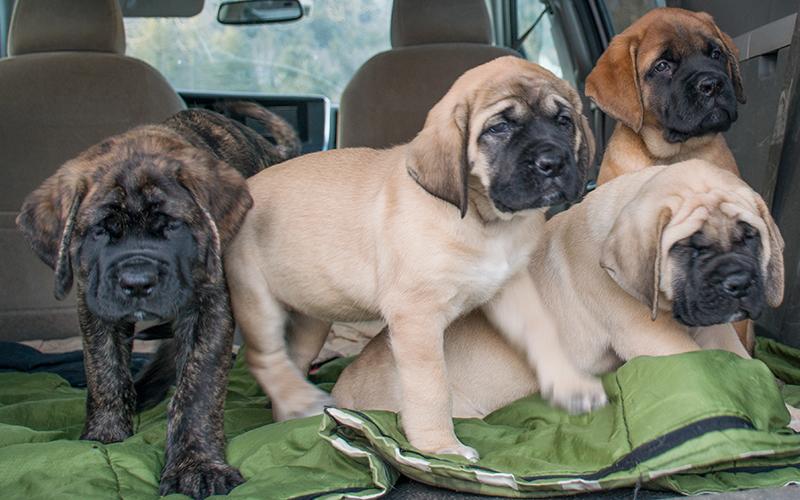 Brian Carten’s therapy dog work has been shut down by the COVID-19 pandemic, but he has been busy nonetheless.

This fall two of his female dogs, Josie and Wilma, each gave birth to a litter of puppies, one on November 2 and the other on November 6 leaving him with 23 puppies and two nursing mothers and a lot of laundry.

He’s had Josie, 3, Wilma, 4, since they were eight weeks old and had plans to breed both of them. He had a third dog who many may have known, Fred, who died this summer. Fred worked as a therapy dog. Neither mother has the temperment to work as a therapy dog, but Carten has identified several of the new puppies with the right temperment.

He learns each dog’s character and temperment by supplement the puppies’ nursing with bottle feeding. Josie and Wilma have 10 teats, but only eight supply milk on each dog, requiring him to bottle feed each puppy each time they nurse which is every three to four hours.

“I bottle feed them to supplement the nursing because they grow so fast. I want them to have the best nutrition possible,” he said.

“Bottle feeding helps me understand the temperment of every puppy based on how they handle and approach the bottle and how they interact with their litter mates,” he said.

He slept on the couch in the living room with heat lamps on the dog pens from November 2 through December 5, feeding and caring for the dogs and doing 12 to 15 loads of laundry from the pens each week (his dryer broke shortly after the second litter was born).

He has selected four dogs from the two litters to become his next generation of therapy dogs, two females (Pebbles and Daphne) and two males (Bam Bam and Barney). At eight weeks, Bam Bam weighs 23 pounds! All the other puppies in the litter are spoken for or with their new families with the exception of one female.

He will train and certify his dogs with Therapy Dogs of Vermont, starting with basic commands and discipline and progressing through a series of phases leading to testing.

“There will be maybe seven to eight dogs in a test group and they are put through rigourous testing with six people hugging them at once, people in masks and gowns and wheelchairs. They’re trying to get a reaction from the animals so they bombard them with situations and stimulation to see how they react,” Carten said.

He hopes to get all four of the puppies certified as therapy dogs so that when he returns to the work he can switch the dogs out as they fatigue.

His therapy dog work is a labor of love and volunteerism – love for the breed and for the joy the dogs bring to the people with whom they work.

“This is volunteer work and the pay is gratification and other than that, it costs you money, gas, testing. But you more than get paid back. There is no price tag on what you're allowed to give back,” Carten explained.

Carten said he’d long wanted an Irish wolfhound, but once he met and had an English mastiff it was game over for him.

“They are gentle giants. Their hearts are as big as they are. They just want to be loved,” he added.

He got his first English mastiff in 1997 when he adopted an 18-month-old female, Siohvan. She was skin and bones and had to be pulled out from under a car. Later he got Roscoe and then Justin (with the help of Beowulf Mastiffs and Susann Everett). Justin was the first dog to become certified as a therapy dog and later Judson and Fred became certified.

A LOT OF FIRSTS

“Justin was the first dog I realized that I could not go out in public with him without drawing a crowd and I could see what he was doing with the crowd and wanted to put it to good use,” he said.

“Doing this work, I was able to do a lot of firsts. Justin and Fred were the first two dogs allowed in Vermont emergency rooms. I started at CVMC and Woodbridge and then schools,” he said.

In 2016 when five local teenagers were killed in a wrong-way crash on I-89, Carten spent four hours a day at Harwood Union for two months. When the driver of the car that killed the students, Steven Bourgoin, went to trial, Carten was asked by a family member of one of the students to escort the families to the trial with Fred.

Before COVID, Carten had just started working with the Washington County Sexual Assault Crisis team with Fred who was the first therapy dog to be part of that work. They’d comfort kids who were about to testify and were just about ready to be with kids as they testified when COVID hit.

Therapy dog work, he said, is his way of going to church. He said he could be shopping and have a dog in the car and people run over to hug the dog because they’d met him in hospitals.

“I’ve seen people wait to see one of my dogs one last time before they passed in nursing homes. In eight years, there are hundreds of stories. I get to witness the interaction between dog and human completely unfiltered. I’m an extension of the dog,” Carten said.

“These unfiltered experiences are things I’ll never forget. They’re gratifying and sometimes not easy. But sometimes we get to transform people’s worst days from to bad to just a little bit better,” he added.