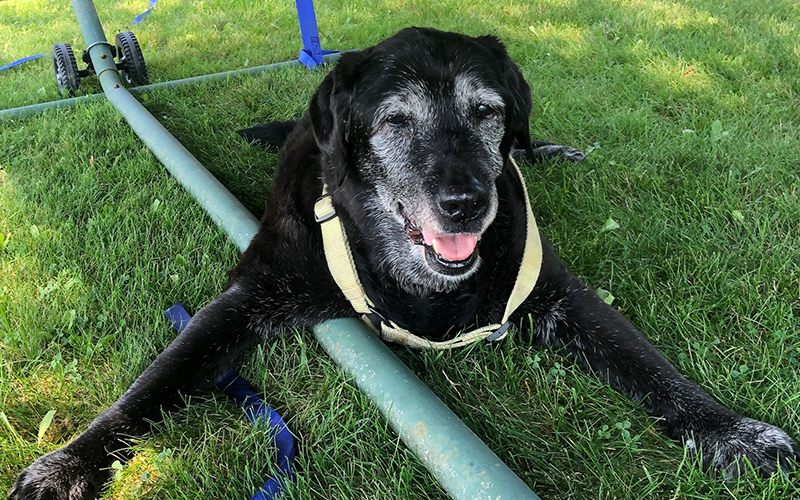 Editor's Note: Jasca Sonis, Warren, lost her 17.5-year-old black Lab Lani on September 8. Each year on Lani's June 15 birthday, Sonis would tell her the story of how they came to be together. The night before she crossed the rainbow bridge on September 8, 2021, Sonis held her and told her the story once again.

Many years ago, my black Lab Midnight passed away. I was very sad and really missed having a dog. I had always had at least one dog in my life to love. I heard about a black Lab puppy that had been returned three times because no one could get her to eat or at least that was the story why this puppy did not yet have a home. So, I went to see her. She ran up to me looking rather scraggly and threw up part of an undigested bird and I thought . . . "Oh my, that dog does not look healthy."

She then started to run around in circles and bit the tail of another dog and started barking and flipping in the air. I thought, . . . "Oh my, this dog is crazy."

The women who was showing her to me, with a rather frightened look on her face, said, "Well what do you think?" I replied, "This dog does not look very healthy and I think she is a bit crazy." I then burst into tears and said, " I'll take her." After finding her in the dishwasher the next day licking chicken off a plate. I did get her to eat. And yes, she was crazy but in a really cool way; kinda in the same way I am crazy. A day doesn't go by that I am not amused by her behavior. I often rub her belly and tell her this story. I am so grateful we found each other. And so very grateful for the last 17.5 years of love and adventures with Lani.