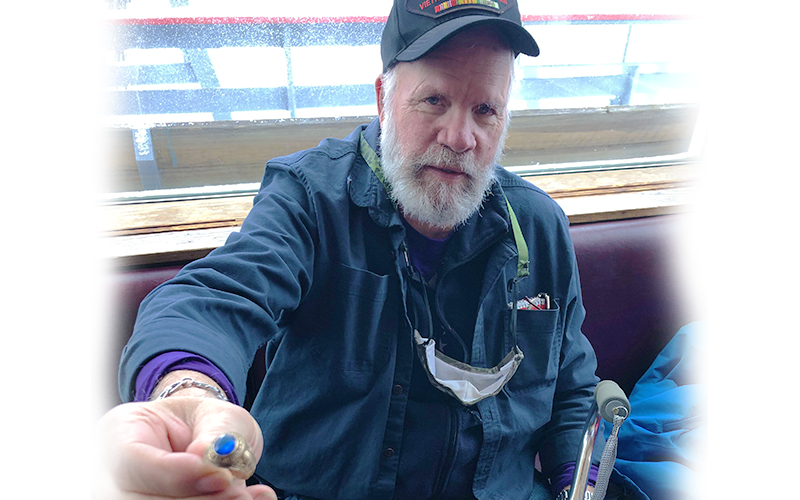 “I was thinking about silver coins and the mountain having opened in 1948. I figured there should be silver coins on the mountain so I got the lift to the top and started metal detecting under the Single Chair,” Barnes said.

He was about 30 feet down from the top of the Single Chair when he found a man’s gold ring. It was a class ring from 1966 from Chatham High School in New Jersey.

But initially, he didn’t know that Chatham High School was in New Jersey.

“There were three Chatham High Schools, one in Massachusetts, one in New Jersey and one in New York. The mascott on the side of the ring resembled a husky dog and none of those schools had a similar mascot. I researched these schools and their history and found that two of them had merged and had had a mascot that was a husky,” Barnes said.

He got in touch with the correct, modern school and working with the guidance counselor and microfiche was able to figure out that the ring had belonged to Stephen Goss, a former Mad River Glen skier, trail crew member and ski patroller who now lives in Maine.

But the search didn’t end there. Barnes couldn’t find him in New Jersey via Google and he was worried that Goss had been claimed by Vietnam. He enlisted the help of his sister who is into geneology and she found Goss in Maine and provided him with a phone number and an address.

“So I called him and told him I had his class ring and he explained how he’d lost it throwing a snowball,” Barnes said.

Goss’s family had been Mad River Glen skiers and had a home on Route 17. Goss and his wife Martha met Barnes at Mad River Glen for breakfast on December 28 where the ring was returned to its original owner.

Goss said that he’d been sidestepping down the mountain, tramping down the Chute trail when he took his gloves off to throw a snowball at someone and the ring flew off.

“I never looked for the ring – when you throw a snowball on top of  Mad River Glen – you have no idea where a ring might land. I’ve probably skied right by it many times,” Goss said. He said he last skied at Mad River Glen during the winter of 1973-74. After patrolling at Mad River Glen, he went on to patrol at Smuggler’s Notch and later went to work for his father at Onion River Pottery. He served in Vietnam right after high school and before working at Mad River Glen.

Goss noted that the ring has a hairline crack after being exposed to the elements on the mountain for 55-plus years and that it no longer fits on his ring finger.

Goss has family in Winooski and still skis, although the last time he and Martha skied was January 2020, before the COVID-19 pandemic.

Chamber of Commerce launches MRV Stand Up for Safety program