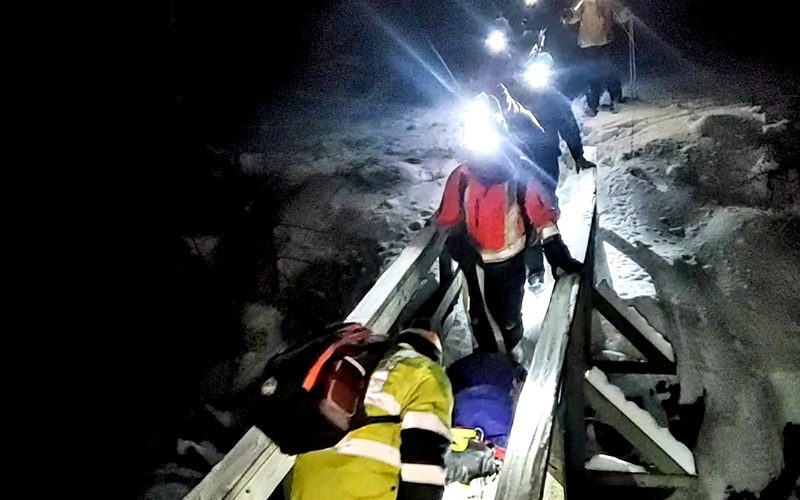 Members of the Mad River Valley Ambulance Service (MRVAS) along with members of the Sugarbush Ski Patrol and Green Mountain Valley School personnel took part in a search and rescue mission on Saturday evening, January 22, to rescue an injured skier.

Sarah Spencer, one of the rescuers, and the operation crew chief, said that on Saturday afternoon, four Green Mountain Valley School ski racers had a day off from their training so they skinned up the back country above and behind the Battleground Condominiums on Route 17 in Fayston.

“They were on their way back down and one of them went off a little jump and landed on a birch tree on the ground with both skis on the side hill. His skis shot out to the side and he landed on his upper thigh/femur on a significant boulder,” Spencer said.

The skier experienced sharp leg pain and the other three sat there with him for a bit to see if it was a charley horse that might abate, Spencer said, but it didn’t.

One skier stayed with the injured skier and the other two skied down to where they were supposed to meet their parents. When the two skiers encountered the parents, that triggered a call to the Mad River Valley Ambulance Service and the Vermont State Police.

A team of some 10 MRVAS personnel along with a GMVS ski coach Colin Rodgers plus members of the Sugarbush and Mad River Glen ski patrol hiked back up to the site and extricated the injured skier on a sled, Spencer said.

“It was about a two- to three-hour operation from start to finish. Everyone was out of the woods by 8 p/m. It was cold and dark,” she added.

“All things considered, it went as well as it could have. It was a good outcome. The guy who fell had a big contusion and it was also great that the kids followed protocol when someone is injured by having someone stay with the injured skier and others go for help,” she said.