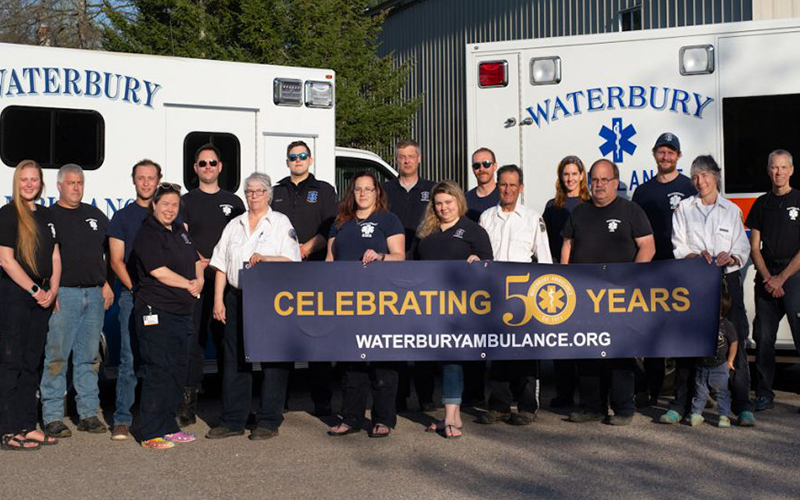 Prior to the COVID-19 pandemic, the Waterbury Ambulance Service Inc, was a mostly volunteer EMS organization led by director Mark Podgwaite who managed 38 volunteers, per diem EMTs and a full-time staffer.

“We supported their efforts in prisons and in long-term care facilities and some schools. That went through the fall until November when we entered into a contract with CIC, Vermont’s testing contractor,” Podgwaite said.

That led to regular testing at the Waterbury Ambulance site on Guptil Road, as well as the very heavily trafficked testing facility on the Barre-Montpelier Road behind Burger King, plus the regular twice weekly testing in Waitsfield and later to the Berlin Mall testing, vaccine and booster clinic that is open seven days a week.

In addition to that work, Podgwaite said WASI began handling pop-up vaccination clinics around the state as well.

Podgwaite said that pre-COVID, things were not quite so hectic, “if you can call running routine EMS calls less than hectic.”

“We were running a small nonprofit business. My normal schedule was 12-hour days Tuesday through Friday. When we were first asked by CIC if we could pull this off, we contacted other organizations like the Mad River Valley Ambulance Service, Northfield Ambulance Service, ski patrols and they all said ‘yes, we’ll help you’,” he said.

Between working in the clinics, handling staffing and administration, managing emails, phone calls and meetings, he’s working six and seven days a week these days.

Prior to working professional as an EMT, he had worked 30 years in the hospitality and food and beverage industry including managerial work for larger events and gatherings. And he’d also been a volunteer EMT.

That work managing larger crews of employees for larger events stood him in good stead as he oversaw the expansion of WASI from its 38 members to 200-plus employees and while this work is not as chaotic and hectic as food and beverage can be, that experience has helped as well.

“But, we’re getting into a routine that is making it easier to manage every week. We have great people here who are taking the bull by the horn to take the pressure of me and Maggie, our administrator,” he said.

The biggest challenge, he said, has been knowing when to say no. “In other words, we get requests to cover things in addition to what we have going on. It gets to the point where we have to take a look at what we have available for testers and vaccine. We’ve been fortunate. We’ve only had to say no once, throughout this whole time, that we couldn’t supply or staff one thing. That shows the dedication of the whole bunch of people we’re associated with,” he added.