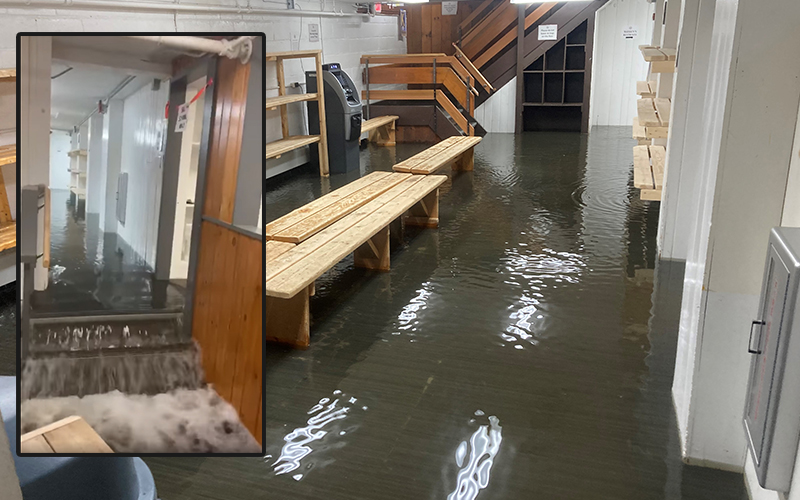 The Mad River wasn’t the only thing that jumped its bank during heavy rains Thursday night into Friday morning on February 17 and 18.

At 3 a.m. on Friday, a groomer at Mad River Glen was waiting for the rain to stop to get up on the mountain and noticed that there was no water flowing through the Mill Brook, explained MRG general manager Matt Lillard.

Instead, he said, the brook was running through the Basebox because an ice jam caused it to jump its bank. The ice jam was at the entrance of Mad River Glen’s snowmaking pond and once the ice dam was broken up, the Mill Brook began flowing in its course. The flooding was compounded by a power outage that occurred on Schuss Pass at 5:30 a.m.

Lillard was called at 4:15 a.m. and with his staff began the process of getting the water out of the ground floor of the Basebox by pushing it out with brooms and snow shovels. Lillard closed the mountain for the day due to the flooding, letting skiers and shareholders know via the daily ski report at 6 a.m.

That email and another one later that morning resulted in shareholders and others donating fans and dehumidifiers and Lillard was able to rent some industrial dryers as well.

“We spent the rest of the day getting the water out of the building, getting things dried out once the power was back on and then checking all the systems in the building,” Lillard said.

“Since it was winter, the water that came through was clean, unlike a summer flood that would carry silt. There was no silting which helped with clean up,” he added.

Lillard said that he’d heard reports of the Mill Brook jumping its banks and flooding the Basebox in the past, some 15 to 20 years ago, but said it wasn’t a regular occurrence. He said it was unrelated to the recent construction around the Basebox.

Mad River Glen was able to open on Saturday for President’s Birthday weekend and even though the floor of the Basebox was still damp in spots and one part of the building was closed, it was a good weekend, he said.

“Holiday weekends can be tough after a rain storm followed by a cool down, but the groomers did an amazing job and the snow held up well and people were happy,” he added.