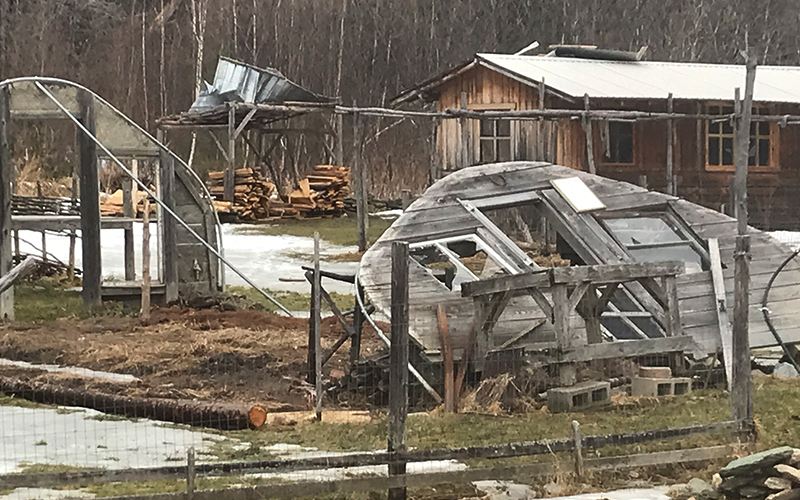 A very localized microburst on Sunday night, March 6, destroyed the American Flatbread greenhouse and damaged roofing and other outbuildings at the Waitsfield inn and restaurant while it was open for dinner.

“We were open and we were serving,” she said. Her son and restaurant manager, Willis, was in the walk-in when the microburst occurred and she said the whole staff heard the explosion/blast while he was in there.

“It broke all the windows and twisted the frame and ripped off roofing materials. It even flattened two of the solar panels in the field,” Schenk said.

On March 7, Schenk said that she and her husband George Schenk and staff members had been picking up glass for a couple of hours after documenting the damage for insurance purposes.

"These were old windows that were in the greenhouse and they just shattered," she said.

"Steve Shea, our insurance guy, told us that greenhouses are really able to withstand this kind of event," she added.

Growing food in on-site greenhouses has been a goal of George Schenk for some time, something he takes pride and great enjoyment in, he said in an earlier interview.

But also, the food from the greenhouse plays an important role in the food prepared and served at the restaurant including vegetables, berries, fruit and potatoes, all of which make their way into and onto flatbreads but also into foods served at the adjoining Lareau Farm Inn.

"This was George's dream when it went up a few years ago. And he'd just hired a new person to help him and he had all these plans for the greenhouse. He was going to start seedlings yesterday but ended up cleaning the chicken coop instead," Schenk said.

She said she's aware that similar microbursts have damaged other area properties including nearby Hadley Gaylord's greenhouses, the dairy barn at the Neill Farm and others.