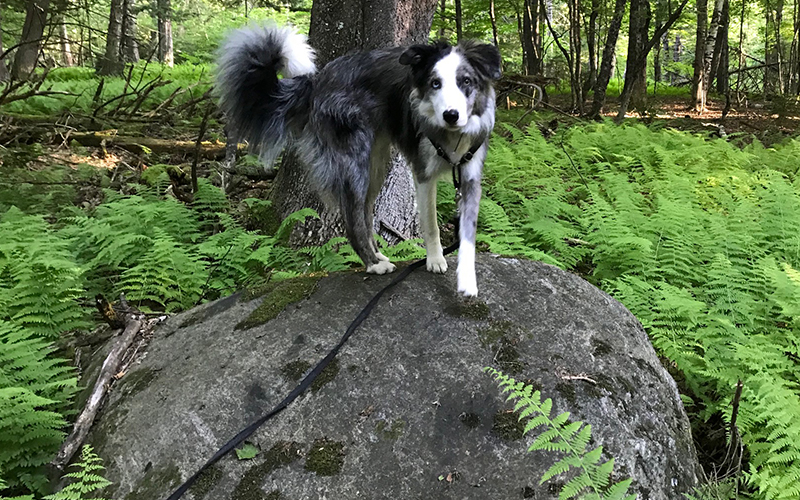 The Dogs on Trails Community Forum took place Tuesday evening, March 22, hosted by Ross Saxton, the executive director of the Mad River Path Association. The forum was held via Zoom and consisted of 23 participants from The Valley and beyond.

A main issue brought up by the group was how to keep dogs on leashes and whether leases should be required at all.

Alice Peal, a dog owner from Waitsfield, expressed concern over leash enforcement as a result of an incident she experienced where her dog was attacked by unleashed dogs.

She also expressed concerns over her own health if an unleashed dog were to approach her.

“I’m not as active as I used to be both from an illness and just getting older and I also have to be extremely careful because dogs can be friendly but they can also jump, leashed or not leashed and if I fall over, I break something,” Peal said.

Other dog owners argued the importance of off-leash exercise for their canine companions and themselves, particularly during activities where leashing might be difficult.

Rob McNeish, a fellow Waitsfield dog owner, loves to enjoy the outdoors with his dog, but finds leash requirements constricting.

“I will admit I let my dog off leash. He’s a very high energy dog and I can’t imagine how either of us would fare if I had to keep him on a leash all the time,” he said.

Eve Silverman, a dog owner from Fayston and volunteer with “For the Love of Dogs Vermont,” stressed the need for balance between those who support dogs being leashed and those who would like to see more relaxed restrictions in place.

Silverman raised the idea of creating a dog park in The Valley to provide a designated area where dogs can safely be off leash as opposed to on the trails.

“I do take my dog up to the Waterbury Dog Park but it’s a schlep and it would be really great to have something in The Valley,” she said.

Silverman’s suggestion was well received and the Mad River Path Association has already begun the process of creating a dog park committee.

Forum participants including Mark Haberle, trail chief of the Mad River Valley Backcountry Coalition also stressed the need for more educational opportunities for dog owners to ensure all proper rules and requirements are being followed on the trails.

“I believe that most folks with animals do want to bring their animals to the right places at the right times and with respect. When you cross multiple land ownerships while you're traveling along a trail it's hard to know whether dogs are allowed or not so I think information dissemination is important,” he said.

Saxton, the facilitator of the Dogs on Trails Community Forum, found the discussion incredibly helpful and will be using the information to create a survey so those who were unable to attend the meeting can share their opinions.