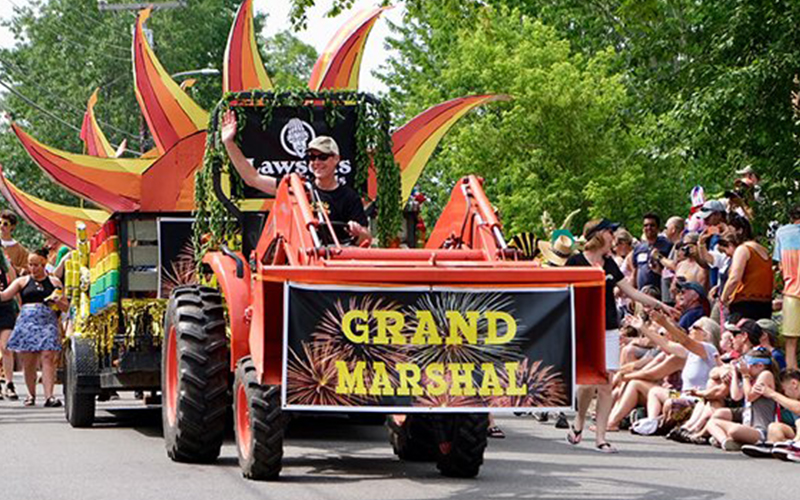 The Mad River Valley Rotary Club, organizers of the annual Warren Fourth of July parade, has selected Win and Maggie Smith as the Grand Marshals of the 73rd annual parade.

For two decades Win Smith owned and operated Sugarbush Resort in Warren before selling to the Alterra Mountain Company in early 2020. Maggie Smith, Win’s former wife, owned and operated The Warren Store and The Pitcher Inn in Warren with the assistance of Win and Maggie’s daughter, Heather Winkelmann.

“Maggie and I first discovered The Valley in 1969 during the winter of my junior year at Amherst College when along with some friends we rented a house on German Flats Road and skied at Mad River Glen,” said Win. Maggie added, “Years later we drove four hours from Connecticut with our four small children and skied almost every weekend and holiday period at Sugarbush.”

When The Pitcher Inn burned down, the Smiths purchased the property and with the help of architects, Dave Sellers and Mac Rood, and builder Hoover Austin, created the new Pitcher Inn which opened in December 1997. A couple of years later they purchased The Warren Store from Carol Lippincott.

“Both Maggie and I have been very lucky to have had amazing people work for our businesses and to have had such wonderful support from the community, “Win remarked. Maggie added, “While the two of us no longer own these businesses, we plan to continue enjoying this special place for a very long time along with our growing families. Watching our children develop into accomplished and passionate skiers was a joy, and now we get to see it all over again with our grandchildren.”

Since selling Sugarbush in January 2020, Win and his wife, Lili Ruane, herself a longtime Vermonter from Shelburne and Valley skier along with her four daughters, have remained very involved in numerous Vermont philanthropies. Win is on the board of the new Three Peaks Medical Clinic, a nonprofit medical clinic scheduled to open next winter at Lincoln Peak. It plans to open in December 2022 staffed by volunteer medical doctors to serve skiers and riders in The Valley as well as local residents. He also chairs the board of The Nature Conservancy Vermont chapter and is a co-chair the Vermont Women’s Fund Capital Campaign.

Since selling the inn and the store to George Dorsey in the fall of 2020, Maggie and Heather have been focused running Winvian Farm in Litchfield County, CT. Maggie has a home in Warren and is a frequent visitor. All of Win, Maggie and Ruane’s children, grandchildren, spouses and partners are similarly passionate about The Valley.

Maggie said, “Both Win and I are really honored to lead the Warren parade which we have enjoyed for so many years, and we are looking forward to seeing our many friends and neighbors and celebrating the fourth with everyone.”

Parade organizer, Susan Klein, echoed their sentiments,” Taking this opportunity to thank and honor Win and Maggie in such a public way is absolutely perfect. I am thrilled that they accepted.”

Stay updated on parade planning progress including the parade theme to be announced at www.warren4thofjuly.com.