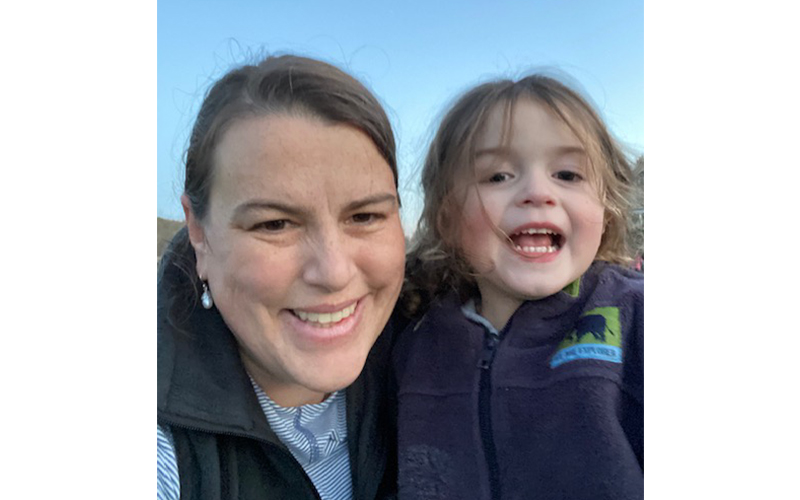 Aimil Parmelee is the complex care coordinator for Central Vermont Home Health and Hospice. She’s been in that job since 2020 and her work involves supporting clinicians in the field. Prior to that she worked in the field with CVHHH patients as an occupational therapist for nine years covering Waterbury and The Valley and other areas.

“Now I work with clinicians, those working in home care, long-term care, maternal care, palliative and hospice care. It’s a broad spectrum of tasks. A lot of the work is helping patients that need a really strong advocate and need more support than they currently have, Parmelee said.

CVHHH clinicians see patients in the field and Parmelee works to pull together the resources and referrals to get patients what they need. She coordinates a lot of meetings between home health and other providers.

“When you’re providing care in someone’s home, it’s an amazing thing because people have more control over their outcomes. They’re really a lot more self-directed in what they want for care because they’re more comfortable in their homes and in expressing what they need,” she said.

She said that patients teach the clinicians how things are going for them and that it can be really hard and really complicated.

“You end up treating the whole family while you’re there. You’re teaching families how to care for someone that’s sick,” she explained.

Parmelee grew up in Randolph Center and attended undergrad in Boston. After graduation she worked in office jobs, wanted to be a lawyer but realized she hated sitting at a desk.

“So I looked at other career paths. My mom was an occupational therapist and I knew it was a really wide field. I could work in health care, schools, early intervention, etc. I figured I probably wouldn’t get bored in this field or have to sit at a desk.

After attending graduate school in Maine to become a physical/occupational therapist, she began working at a neurological rehab center in Kennebunk. A desire to be back in Vermont and closer to her family brought her back to Vermont and the first job she applied for was at CVHHH where her mom had worked for many years.

“I was interviewed by people who had worked with my mom! It was such a comfortable interview,” she recalled.  She began work in July 2011 and said she felt immediately embraced by her team.

“I’ve seen how communities come together in Vermont. It’s such a privilege to be able to help people where they’re at. Many people are in the final season of their life and I just loved being able to offer them compassionate care where they’re at when I was in the field,” she noted.

Parmelee, who lives in Randolph Center with her family, said that the hardest part of the job is working with patients who are housed in hotels due to homelessness.

And the best part? When she and her team are able to resolve a problem that feels nearly impossible.

“We had a young woman, who was 26 and had a long-term care provider living with her due to a long-standing injury. She had pretty significant placement challenges and the person who lived with her moved to another job. At 26, she was not a nursing home candidate and there was not another person to come live with her. But then we found an ideal solution, that in a situation like that felt like pulling a needle out of a haystack. It’s the cases like that that stay with you and keep you working,” she added.