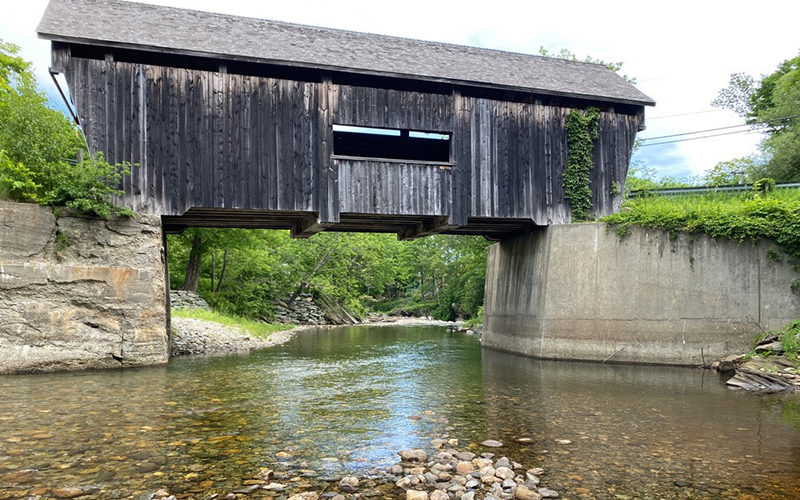 The Warren Select Board had put out a request for bids for work to be done on the covered bridge in town. The work, which would be largely concrete work along the bridge’s abutment, was estimated by Dubois and King engineers to cost approximately $450,000. The bid from ECI Engineers came in at roughly $1,167,846, which was significantly more than the select board had expected.

ECI was the only bidder. While some of that may be attributed to the increasing cost of materials, board members believe that the engineers did not expect to have the high bid accepted. “This contractor threw out an insane price because they don’t want the job,” board member Devin Klein Corrigan, who co-owns Corrigan and Klein Artisan Builders, said. She questioned whether they could give potential contractors more lead time to fit the work into their busy schedules. The board decided to reject the bid and rebid for the work in the fall.

Perennially, the issue of parking at Warren Falls along Route 100 comes up, as in the summer months dozens of cars can typically be found along the roadway, creating a safety hazard for cars and pedestrians. The select board had reached out to VTrans with possible solutions, including issuing municipal tickets for those parking illegally along Route 100, reducing the speed limit, and moving the guard rails. VTrans rejected these measures.

“Nothing we asked for,” Klein Corrigan said. The board discussed contracting with state police for a few weeks to see if enforcing parking restrictions helps. It also discussed reaching out to Senator Dick Mazza of Colchester. “We are reaching out to a senator to pressure VTrans to do something about the parking situation on the road at Warren Falls,” Bob Ackland said in an email.

In other business, the board approved the 100 on 100 relay running race that will go through Warren on August 13. Susan Klein, Fourth of July parade organizer, discussed the plan for parking on the day, which can be a challenge given how many people attend the parade each year. First Student bus company will bus people from Sugarbush. No parking will be allowed at Warren School. There will be signs restricting parking along adjacent roads. Parade posters are still available for free with a suggested donation to benefit Ukraine. This year will mark the 73rd parade in town.

Ackland gave an update on the Mad River Housing Coalition’s work on housing in The Valley. The coalition had requested $150,000 in collective ARPA funds from Warren, Waitsfield and Fayston to support a full-time executive director for the coalition. The towns denied the request. Michelle Leibowitz served as part-time director from January to June of this year, though the funding for that position has now dried up. The coalition is comprised solely of volunteers. Ackland said that the Mad River Planning District may step up to take the lead on housing in The Valley. The planning district and the housing coalition will meet this week to discuss the next steps and the role they each may play in addressing the housing crisis locally.