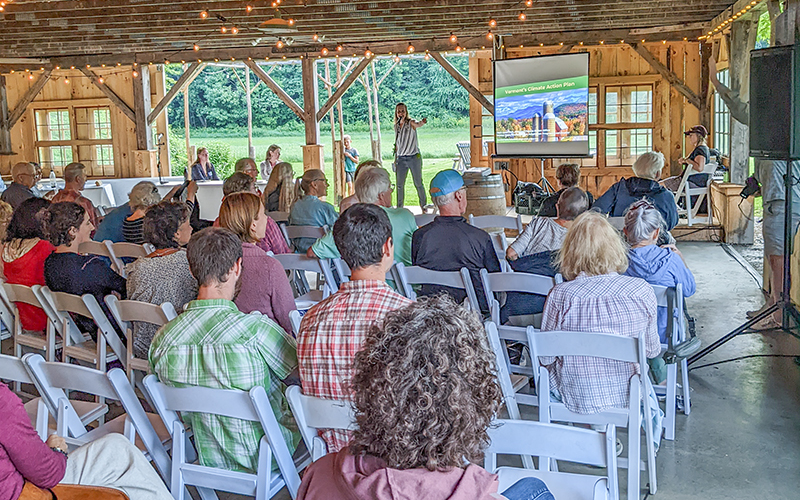 For the Record this story has been updated: An article in the August 11 issue of The Valley Reporter incorrectly stated that the Mad River Planning District is organizing the Ridge to River 2.0 program. The Friends of the Mad River organizes this program with support from the planning district.

Friends of the Mad River (FMR), in partnership with the Mad River Valley Planning District, (MRVPD) continued its series of community climate chats at Lareau Farm on August 9, during which community members enjoyed American Flatbread and salad. During the evening participants heard from Jane Lazorchak, director of the Vermont Global Warming Solutions Act, and Marian Wolz, coordinator of the Vermont Global Warming Solutions Act, both from the Agency of Natural Resources. Mad River Planning District community planner Amy Tomasso also spoke about the work the planning district is doing related to climate change, including supporting The Friends of the Mad River in launching Ridge to River 2.0, expanding on the group’s work to make The Valley more flood resilient. The group is still looking for volunteers.

Lazorchak, who lives in Waitsfield, spoke about the state’s climate action plan and how to implement climate action in Vermont communities. According to the FMR website, “The Vermont Climate Action Plan aims to dramatically reduce greenhouse gas emissions, help protect Vermont communities and landscapes from the greatest risks of climate change and create new clean energy industry and jobs.”

The state’s climate council adopted what Lazorchak referred to as the initial climate action plan, noting that it would be a living document, which the council compiled in roughly one year during the pandemic. She called the plan a cross-collaboration between community members and state government and noted that public input was considered at every meeting of the council. The plan must be adopted and renewed every four years.

The climate action plan, which Lazorchak described as a huge document, has 64 ‘pathways’ to show what is needed to address climate change in Vermont, as well as 203 tasks in five impact areas and “lift up communities going forward.” She called the plan comprehensive and said that it looked at systems change and how both local and state leaderships can help municipalities reduce climate impact in their communities. She pointed out FMR as one organization doing this work locally.

Marian Wolz discussed the municipal toolkit the group is creating to provide towns with resources, guidance and support. She said developing the toolkit is in its beginning stages. The task group has identified three key priorities for the toolkit: keeping it simple, highlighting existing work on climate across state government and amplifying climate change impacts and issues. It is looking at themes such as housing, transportation systems, natural environment, agriculture and food systems and climate justice and equity. One goal is to connect people to existing tools and resources across the state that can be used at the local level for climate action. This will include grant funding options, education and outreach and having technical support for navigating resources.

During the question and answer portion of the evening, community members expressed concern over the lack of public transportation in The Valley, the walkability and bikeability of Valley villages and weatherization initiatives, as well as changing individual behaviors such as consumption, travel and idling cars. Tomasso noted the planning district has an advisory committee working on providing incentives for transportation alternatives such as E-bikes and electric vehicles. Local efforts such as stewardMRV and the VOREC grant the recreation district has received to implement a recreation hub and a trail to connect the hub to downtown Irasville were mentioned as examples of climate action.

Tomasso noted immediate steps that could be taken include signing up as a volunteer for the Ridge to River 2.0 program, signing up to receive information from the local energy coordinators, attending the planning district’s transportation advisory committee meetings this fall and making donations to enable the district and FMR to host more free community events.