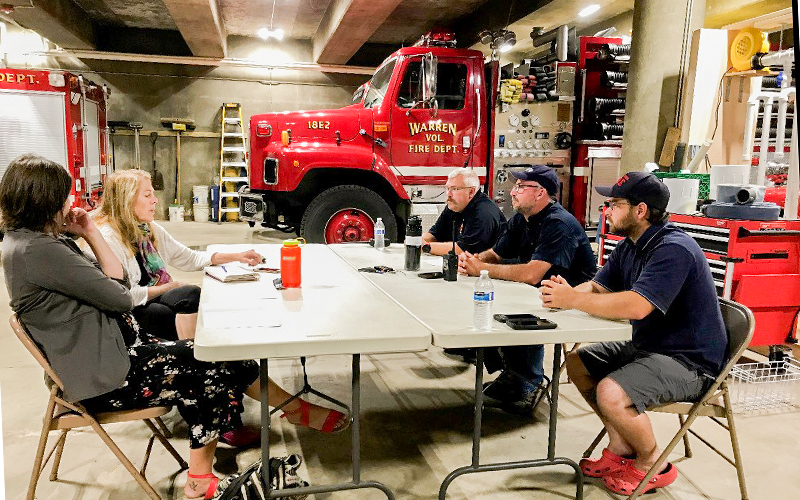 This week The Valley Reporter sat down with the Warren, Waitsfield-Fayston and Moretown fire chiefs to discuss the history of their volunteer departments, what’s changed over time, how fires are fought and how community members can get involved. This is the first part of a series of that discussion, which will also be available to view on MRVTV.

Tripp Johnson has been a member of the Waitsfield-Fayston Fire Department for 17 years and is in his third year as chief. Stefan Pratt will celebrate 16 years on the Moretown department next month. He started as soon as he turned 16 and is in his fourth year as chief. Jeff Campbell has been a firefighter for 20-something years, 16 or 17 of those in Warren. This is his second year as the chief.

When asked what inspired them to volunteer as firefighters, Pratt said, “My grandfather was a firefighter on the Bethel Fire Department until the day he died.” He said when he was at his grandparents’ house, he’d often accompany his grandfather and hang out at the fire station while he went on a call, which Pratt said, “was the coolest thing you could do when I was a kid. As I grew up I wanted to get started. I did the cadet program at Waterbury. It was great . . . I’ve just loved it since day one.”

Johnson said he was inspired by working with volunteer firefighters at his job, who told him they needed strong, young people to get involved. After helping out at a fire that required a lot of manpower, he attended a training. “I got more and more interested in it. I went to firefighter one [training]. It’s a good feeling of helping out the community, helping somebody in need.”

Campbell said he was inspired by a high school friend whose father and brothers were firefighters and who joined the local department when he was 18. “I said, alright, why not? What do I got to lose?”

The Valley Reporter asked about some of the longest-serving volunteers on the local departments.

“One of my longest-serving members is Paul Hartshorn,” Johnson said. “Still to this day, he’s right beside me every step of the way. He enjoys running the tanker so he’s right there helping out. Gordie Eurich is another one. Eric Haskin been on for 46 years. We’re blessed with people with a lot of experience. Then we have mid-level people and then we’re pretty blessed with some newer people. We have three or four new members this year that are really stepping up.”

“Currently on the department we still have Steve Smith,” who Pratt said has been on the Moretown department for 25 years. “He’s still active and comes when he can. We also have Duane Howes. He’ll show up at a fire scene and make sure we all have something to drink. He’ll still show up and see if he can help in any way.”

In Warren, “We’ve got Paul’s [Hartshorn] brother Butch, who’s been on for a little more than 55 years,” Campbell said. “We’ve got a couple guys -- Charlie Snow and Pete DeFreest -- who’ve both been on roughly about 40 years. Then we’ve got a couple guys that have been on for 30 years. We have quite a lot of tenure in our department. But then we also have a lot of new guys. We probably have eight members that have been there less than six years, maybe even 10. It’s good because they learn from each other.”

Last year the Waitsfield-Fayston Department had a Harwood Union High School intern, Patrick Snell, who worked with the school to spread word of the need for volunteers to high school students. “The youth, the interest level isn’t quite where I’d like to see it,” Johnson said. Campbell and Pratt agreed.

“We’re still hurting” for new members, Pratt said, “but we certainly are always trying” to recruit. In the past two years, the Moretown department has had two new members join. “It’s hard to get people to come,” he said, noting the challenge of being an all-volunteer department.