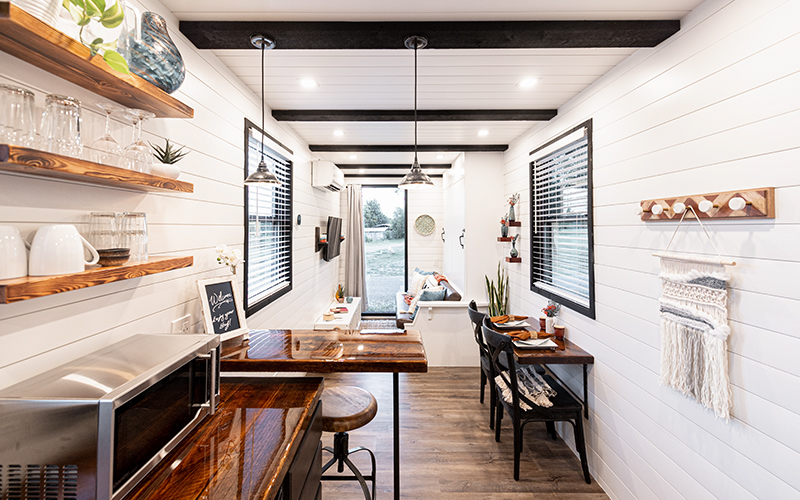 The Waitsfield Select Board approved a motion to waive the zoning application fees for a woman seeking permits to install a tiny home on a concrete pad near Our Lady of the Snows Catholic Church in Waitsfield.

The board, at its September 27 meeting, considered the request which came from Loraleh Harris who has taken a position as assistant director at The Waitsfield Children’s Center, which shares the driveway and lot with the Catholic church.

Per the town administrator’s report, Harris is currently commuting to Waitsfield from Calais, which is financially taxing.

“She is hoping to move as soon as possible to lower expenses. There are costs associated with moving the tiny house including towing, septic repairs/pumping, reinsulating, and anchoring the unit. The costs of the move are much greater than anticipated and a waiver of the $350 zoning application fee would provide some relief,” town administrator Annie Decker-Dell’Isola explained in her report to the board.

Board chair Christine Sullivan said that the board decided to allocate ARPA funds to cover the permit fees, noting that such a use hit several of the buckets for spending that meet ARPA guidelines.

Asked if this week’s decision means that others who would like to install a tiny house can expect to be able to apply for and have their fees waived, Sullivan said she believes it is a possible use moving forward, per the work that the town’s ARPA committee has done to date.

“Hopefully future applicants will apply directly to the committee so we can follow the process as laid out,” Sullivan said.

She said that the board is working on developing an intake for specific funding requests. Until that is completed, those interested can email Dell’Isola at This email address is being protected from spambots. You need JavaScript enabled to view it..

At that same meeting, the board appointed Chris Badger to the town’s ARPA Advisory Committee. Badger is also the town’s energy coordinator. He asked to split his time on the ARPA Advisory Committee with Joel Rhodes who helps him with some of energy coordinator work. The board appointed Badger and Rhodes as well as former town select board member Jon Jamieson to the committee. The committee meets on Wednesdays at 5 p.m.