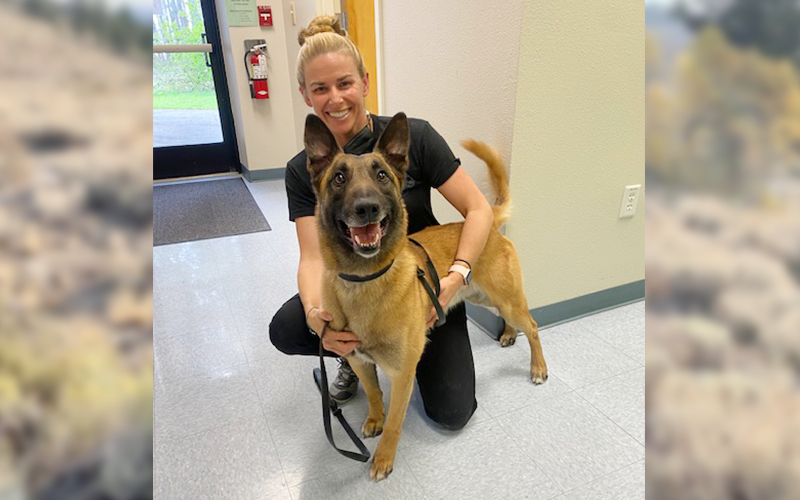 This week’s Where Are They Now feature focused on Waitsfield native Brittany Marble who is a veterinarian and veteran.

But first, a public service message from Marble.

“November is the worst flea and tick month. People like to stop giving the flea tick meds, thinking it’s cold and winter is coming. But it’s cold and the ticks are seeking your animals for warmth. I know it’s expensive but we have a lot of Lyme in this area and dogs are susceptible to Lyme nephritis which basically shuts down the kidneys and dogs can die in weeks,” she cautioned.

Marble grew up here and graduated from UVM with an animal science/pre-veterinarian degree in 2007 before heading to LSU for vet school. She graduated in 2012 and was accepted into the U.S. Army’s veterinary corps.

“It’s a really unique branch of the military that falls under the medical corps. Army vets are placed where there are working dogs,” she said.

That was the start of a 10-year stint in the military that took her to four different bases including Patrick Air Force Base in Florida, Guantanamo Bay in Cuba, Groton, Connecticut, and then in Washington state working with Special Forces. At each base she worked variously with security dogs, service members’ pets, dogs that search for weapons and bombs and dogs that parachute out of helicopters strapped to their handlers.

“I was coming to Vermont a lot when we were stationed in Connecticut but then I got offered the chance to be one of the veterinarians for Special Forces. It was an incredible opportunity in a field that is tough to break into,” she said.

“It’s a totally different way to be utilized by the military. The Special Forces have multi-purpose dogs. They are used for clearing buildings, detecting bombs. Malinois are used for patrolling and bombs. Dogs are strapped on service members. Small elite teams of Green Berets use uniquely trained recon dogs. They’re beyond service dogs,” she said.

Along the way she met her husband, Craig McCullough, a former Marine.

“He knows more about military life than I do. I’m an officer. He was an infantry Marine. We met running a triathlon in Louisiana and got married in 2013,” she said.

She loved the work she was doing with Special Forces, especially in preventative medicine, used when Special Forces drop into small remote areas in nine- to 12-man teams and they need to know everything about disease, what they can slaughter, how to safely slaughter things, like a TB-infected lung found in a goat they bought at a market in Mongolia.

After 10 years in the service, Marble was a senior major looking at going back to a desk job or residency or the opportunity to move back to Vermont.

She and her family had moved four times in 10 years. Her husband had changed jobs a lot. They chose to return to The Valley where they have family. Marble is working at the Burlington Emergency and Veterinary Specialists (BEVS) and her husband works for Turner Construction, having transferred from the Washington office to the Boston office.

They have three boys, 7-year-old twins and a 5-year-old. They live in Waitsfield and have three horses in Warren plus several Shih Tzus, a German shepherd, two corgis and multiple cats.

She loves both gigs. BEVS, she said, is providing really outstanding service to Vermont, New York and parts of Canada, offering 24/7 service.

“The things we see are true emergencies. I can euthanize one pet and walk into the next room to treat the next pet. Attached to every leash is a person or five whose life is going to be impacted by what we find with their pet,” she said.

She relies on empathy and kindness when she has to deliver bad news. I put myself in their position. The day you can deliver a terminal diagnosis or euthanize an animal without crying is the day you need to step back and take a break,” she said.

“I tear up and cry during most euthanasias,” she said, noting.

She said she loves working with Anderson and said recently her sister asked how her shift had gone and she said, “Every patient I saw went home with their owners.”

“Karen is teaching me so many things. I listen a lot,” she added.