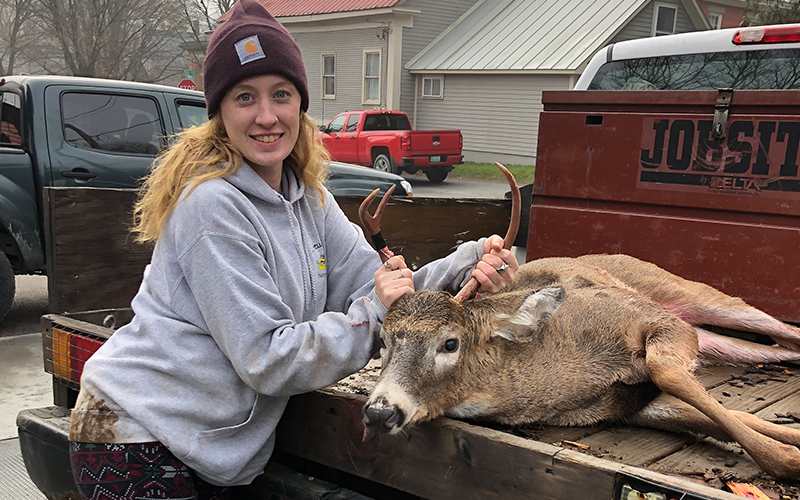 At the Village Grocery in Waitsfield, business owner Troy Kingsbury said that COVID changed the culture of hunting season when hunters were allowed to report some of the animals they harvested online versus the previous in-person check-in at a reporting station.

The VG has been a reporting station since 2006 when Kingsbury said that Ky Koitzsch came to him and asked if he’d do it, offering to build the frame that holds the hoist, winch and scales for weighing game. Store owners received $1 per each animal registered and reported. The price (set by the Legislature) has been $1 since 1971 when it was increased from $0.25 per animal. Game reporting stations receive other fees for licenses, waterfowl stamps, lottery tickets and bear teeth.

Pre-COVID, Kingsbury said hunters brought in turkey, deer and bear to be weighed and registered. They also came into his store and shopped.

“Previously, I’d get all excited about each hunter, take pictures, put them on our Facebook page and make it fun for the hunter,” Kingsbury said. He said he feels the sense of community around hunting had been diminished by that lack of connection.

“When COVID happened, the state decided to do online check-ins for turkey, then that went from turkey to other game. Now the only game that hunters have to bring in are bear and rifle season deer,” he added, noting that since COVID, he’s seeing about 300 animals a year.

David Sausville, wildlife management program manager at the Vermont Agency of Natural Resources Fish and Wildlife Department, said that the online reporting allows hunters to use an app to report game taken during archery and muzzle loader season. Hunters are asked to report on whether they’ve taken a doe or buck and estimate the weight. He said that game taken in youth/novice weekend (coming up this weekend) and the traditional 16-day deer season (rifle season) in November are reported at big game stations such as the VG.

Asked about whether online reporting impacts the state’s ability to accurately assess the health of Vermont wildlife, Sausville said the majority of animals taken are taken during the early weekend and traditional hunting periods. On the first two days of rifle season there are state biologists at numerous reporting stations taking a tooth from animals that are harvested and also assessing them for general health.

Sausville said that hunters need to register their harvest with the state within 48 hours and said that the online reporting facilitates that because not all game stations are open when hunters come out of the woods. Kingsbury noted that as well reporting hunters coming to weigh their kill from as far away as Stowe and Rutland.

He said that he leaves the weigh station open 24/7 so hunters can weigh their harvest.

“The scale is also used to weigh pumpkins and change tires,” he said.

Kingsbury thinks that the state needs to be more consistent with either all online reporting or more in-person. He thinks the hybrid system is impacting hunting culture in Vermont.

“I get his point,” Sausville said, “But I think the culture of deer hunting is embedded in Vermont. This weekend I’ll work a check-in station for kids coming in to report their first deer. It’s a great time with kids and their families. I haven’t heard those complaints before. I generally know when my friends harvest deer and there’s usually two or three people who will help get the animal out of the woods and help dress it.”

“I don’t think we’re losing that connectedness, but it’s an interesting question to ask,” he added.