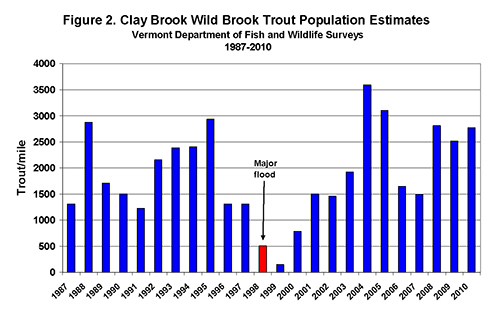 The Vermont Department of Fish and Wildlife report on how
flooding impacts wild trout population shows wild brook trout
population in Clay Brook from 1987-2010, including the flood
of 1998. Tropical Storm Irene’s flooding is considered worse
than the flood of 1998.

With fishing season opening this weekend, Mad River Valley anglers will need to be patient when seeking wild trout in the Mad and other local rivers and watersheds. Flooding, of the type experienced last August, and its aftermath impacts wild trout populations for two to four years, and longer when in-stream and streambank work reduce habitat.

While wild trout populations in local and state watersheds typically take two to four years to recover from floods, in the case of Tropical Storm Irene, the recovery period may be significantly longer – several decades – because of loss of habitat, according to a report issued by the Vermont Fish and Wildlife Department on the impacts of Tropical Storm Irene on stream habitats and wild trout populations.

In both the Mad River Valley and White River Valley watersheds, extensive in-stream work was done. While communities and volunteers have made extensive gains in rebuilding homes, businesses and infrastructure, these surface repairs can hide what lies beneath the rivers’ waters. What lies beneath the surface post-Irene is surprisingly different in parts of the Mad and White Rivers. In Vermont, the report identifies 77 miles of stream having degradation of habitat from post-Irene stream channel alteration activities.

Catastrophic flooding can have profound effects on wild trout and other aquatic populations. Young fish are most susceptible; however, adult trout experience a high mortality rate as well. Even when the impact of flooding on trout populations is severe, the subsequent recovery can be relatively quick when aquatic habitat is not compromised long term.

In the case of Tropical Storm Irene, there was extensive streambank and in-stream work that was done following the flood throughout The Valley and Vermont. In the aftermath of the flooding, local officials (working with state officials and verbal permission) undertook immediate and extensive stream channel alterations removing large amounts of fill, top soil, gravel and road material that ended up in the river.

The problem, which the Fish and Wildlife report makes clear, lies within the fact that portions of this in-stream activity were conducted without proper consultation, according to the Vermont Fish and Wildlife Department. In some cases, it was conducted for reasons well beyond normal flood recovery, the report notes.

The report explains that large-scale removal of streambed material and natural wood created a system of homogenous, over-widened stream channels. Fish populations require an aquatic habitat comprised of diverse flows and depths which can only exist if supported by a variety of streambed substrates including natural wood and vegetation. When streambeds are stripped of large quantities of natural wood and over-widened, they become devoid of habitat complexity and diversity.

Long-term studies of wild trout populations impacted by flooding that show a two- to four-year recovery period were done on streams without post-flood channel alterations. In streams where aquatic habitat has been severely altered through natural wood mining, and channel widening, the same trout populations may take decades to recover.