Chris Badger, a resident of Long Road in Waitsﬁeld, will soon be in-stalling solar panels on the roof of his home. Badger, who serves as chair of the Waitsﬁeld Energy Committee, has long been interested in switching to solar energy—“from a professional standpoint,” he said. 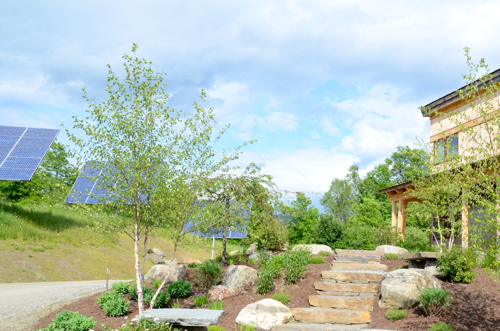 But with the help of SunCommon, a Waterbury-based company that makes it possible for people in The Valley to install solar panels with no upfront costs, even homeowners who aren’t formally acquainted with the ener-gy industry can make the switch to a more sustainable power source.

“I’m not a total environmentalist, but they say we’ve been causing global warming,” Lenord Robinson of East Warren said. Robinson is one of the 95 households in The Valley in different stages in the process of going solar with SunCommon, and he owns one of the six houses where SunCommon is set to install the panels this June or July.

While decreased utility costs is certainly an added beneﬁt of solar energy, Robinson, like many, is interested in switching to renewable energy sources to help save the environment.

“I’m 83 years old, and I’ve seen a lot of changes [to the natural world] in my 83 years,” he said. “I like the idea of making electricity from the sun or wind.”

Robinson started looking into installing solar panels in his home nearly three years ago, after attend-ing a solar energy expo in Burlington.

Unfortunately, he called three different companies, “and no one called me back,” he said. So after reading about the start of a new com-pany called SunCommon in The Valley Reporter this past March, Robinson got in his car and drove up to Waterbury to speak with them in person.

Badger had also looked into installing solar panels in his home in the past with com-panies like All Earth Renewables, Inc. and Vermont Public Interest Research Group (VPIRG), he said, but Sun-Commonan outgrowth of one of VPIRG’s successful pilot programs—has combined “the best of the two,” Badger said, “making solar simple for folks, which I found very appealing.”

SunCommon works by allowing homeowners to make monthly payments of the same amount or less than their current electric bill. These pay-ments go towards a 20-year solar panel lease. By paying a low, ﬁ xed solar rate, SunCommon customers are thus protected from rising utility costs.

Badger, who has already gone through the company’s preliminary evaluation processes, is set to install solar panels on his house sometime later this month. The pan-els will cover a total area of around 200 square feet on his roof and will produce about 4,000 kilowatt hours of electricity per year.

This amount of electricity will be more than enough to cover all of the Badger household’s current electric needs—and with energy to spare. According to Badger, Vermont helps foster the environment for going solar, because unlike some electric companies in other states that disregard excess energy production, Green Mountain Power, which serves The Valley, maintains a special net-metering agreement, meaning that “they’ll essentially pay you for excess generation,” Badger explained.

But what if there is no excess generation? Is Badger ever concerned with not pro-ducing enough solar energy to meet his home’s energy needs, say, during the winter when there is less sun?

“No,” Badger said, explain-ing that SunCommon’s system is not “off-the-grid.” In this case, “the meter is still there and you’re exporting power into the grid,” he said, “so you’ll get power back from the grid when you’re not produc-ing as much.”

It sounds like a fool-proof system, and one which Bad-ger said he would deﬁ nitely recommend “to anybody that gets good sun exposure.” In signing up with SunCommon, customers agree to a 20-year lease, however, “so you have to read the terms of the lease and make sure you’re com-fortable with it,” Badger said.“

If you end up selling your house, you’d have to ﬁ nd a new owner willing to take on the lease,” Badger said. “But that shouldn’t be hard.” Considering how much utility costs are going to increase in upcoming years, you’ll probably be doing them a huge favor.