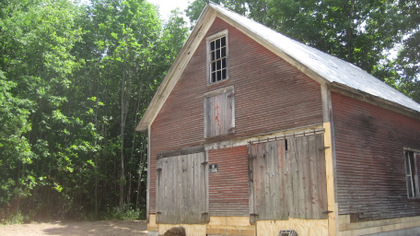 Farming has always been a major part of Warren’s history, thus it seems only fitting for a broken-down barn to become home to some of the town’s oldest artifacts.

That’s why the Warren Historical Society is currently working on renovating the barn behind the Ruby Blair house in Warren Village to serve as a space to display pieces from the town’s past to the public.

According to Cindi Hartshorn-Jones, town administrator and treasurer of the historical society, Warren has collected some interesting items over the years, including an old-fashioned hearse, pump organ, wheelchair and American flag as well as several gas lanterns that used to light the town’s streets.

Unfortunately, excluding the hearse’s very public appearance at the Warren Fourth of July Parade, very few people have had the opportunity to see these items. “They’ve been stored,” Hartshorn-Jones said. “The pump organ is in somebody’s barn somewhere,” she said, “and the American flag is currently rolled up under The Warren School’s stage.”

The barn, which was built in the early 1900s and used as a carriage house, is currently not the most stable structure, but it does remain standing after all these years, at a time when many of The Valley’s older barns have fallen into disrepair or been destroyed.

The construction company Building Heritage is currently working on the first step in a three-step renovation process, which involves jacking the barn off the ground and putting in a proper foundation, as the structure “was basically built on four rocks in the ground,” Hartshorn-Jones explained.

The historical society hopes to have the building finished and ready for informational placard displays by 2014, and in the meantime it’s working to build its artifact base. “A lot of people have things like old quilts and photographs, but they want to make sure they’ll be preserved,” Hartshorn-Jones said. And with this new space, they will be.

Vermont Festival of the Arts barns and bridges tour

On August 26 from 9 a.m. to 5 p.m., the Vermont Festival of the Arts has arranged a self-guided barns and bridges tour. Maps for the tour will be available at the festival offices in the Village Square Shopping Center.

Those interested in painting for the Vermont Barn Paint Out can make arrangements to paint on this day by contacting Karen Nevin at the Festival offices at 496-6682.