After years without use, the Round Barn came full circle

(From left to right) AnneMarie DeFreest,
Jack Simko and Doreen Simko in front of
the Round Barn in the 1980s, before
renovations began.

Ralph and Marge Joslin owned and operated a dairy farm on East Warren Road for almost 50 years until, as they grew older and the property became more difficult to manage, Marge said to her husband, “Either the cows go, or I go.” The Joslins auctioned off the cows and the rest is history, according to AnneMarie DeFreest.

After the cows were gone, Ralph and Marge “basically just shut the doors of the barn and nobody went back in,” DeFreest recalls. DeFreest inherited the Joslins’ property from her parents, Jack and Doreen Simko, who purchased the farmhouse and barn from the retired couple back in 1986.

Today, the farmhouse and barn comprise The Inn at the Round Barn, whose circular, clapboard structure has become not only an aesthetic symbol of the Mad River Valley but a major contributor to its economic vitality, as the building’s event space and lodge inn play host to weddings, cultural events and the influx of visitors that attend them.

DeFreest now runs The Inn at the Round Barn with her partner Tim Piper, but when her parents sold the family’s house in New Jersey and purchased the farmhouse and barn from the Joslins, “basically we thought they were crazy,” she said. The barn was crooked and “essentially had no foundation,” she explained, and the surrounding lawns were overrun by raspberry brambles and the occasional dead chicken.

This is because, in their final years on the property, the Joslins had devoted their time not to farming but to running a small, hostel-like lodging operation out of their house. This was back in the 1960s, when The Valley’s ski industry was just starting to take off, and “if you were a skier and you were looking for a place to stay, there weren’t many lodges at that time,” DeFreest explained. The Joslins’ lodge had two bathrooms and four bedrooms, with 10 bunk beds per bedroom.

Today, the floral-wallpapered, chintz-armchaired, 12-bedroom Inn at the Round Barn is decidedly less rustic, but it still maintains a certain old-fashioned appeal. In renovating the farmhouse, DeFreest said, her family “worked back to the original structure,” removing features that had been added since its original construction and restoring those that had, over the years, deteriorated.

After opening the inn, DeFreest’s parents undertook the even bigger project of redoing the barn. “It would have cost us a fraction of what it did if we had just knocked the building down and started from scratch,” DeFreest said, “but my father believed in restoration,” and he used as many original wooden beams and other fixtures as he could in the building’s reconstruction. “He was the original recycler,” DeFreest said.

Initially, DeFreest and her family hoped to make the barn into a shared space for artists, housing studios on its lower level and a gallery on its upper one, but after much consideration, DeFreest proposed a different plan. “I said, instead of adapting the barn for a particular use, why don’t we just adapt uses to the barn?” DeFreest said, and her family agreed to restore the existing structure and then take it from there.

It never really occurred to DeFreest and her family to use the barn as a wedding venue, until one day, in the middle of reconstruction, a couple stopped by and asked when the barn would be finished. The family asked why, and the couple responded that they’d like to get married there.

“I think we rented out the place for like $500, and they threw a big party,” DeFreest said. “We learned a lot [from that first wedding],” she said, including that hosting weddings could help bring in the money needed to support the beautifully restored property, so that it would never again fall into disrepair.

Today, the Round Barn hosts about 40 to 45 weddings a year, with an average of around 120 people per wedding. On any given Saturday, townspeople drive by women wearing matching satin dresses and men in tuxedos, posing with the bride and groom on the impossibly green grounds surrounding the barn, but “I don’t think a lot of people in town know a lot about the history of the building, or just how much we put into it,” DeFreest said.

Now, during the winter, the Inn at the Round Barn is the largest event space available for use in The Valley—as similarly sized venues at ski resorts are otherwise occupied by powder-happy patrons—and because of this, it’s not uncommon for the Round Barn to host a wedding on a Saturday and a memorial service the following Sunday.

For DeFreest, these side-by-side yet starkly different services in a way represent her and her family’s involvement with the Round Barn’s conversion from defunct dairy space to lively event facility. The experience “has brought a lot of joy and sorrow,” she said, “but I wouldn’t trade it for anything.”

From cows to cultural events: the story of Skinner Barn 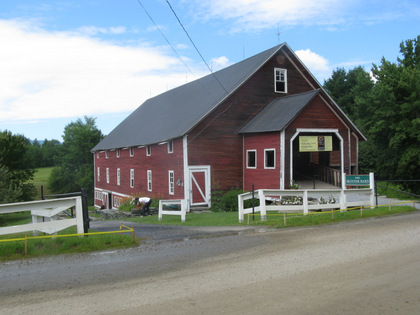 The Skinner Barn on Common Road in Waitsfield was originally
designed for dairy cows. Today, the space is used for weddings,
plays and other cultural events.

In 1988, Peter Boynton attended the Warren Fourth of July Parade, where a woman approached him and asked for his autograph. She recognized Boynton from his role as Tonio Reyes on the popular daytime soap opera As the World Turns.

The two got to talking and Boynton mentioned that he’d love to move to Vermont. “Oh, you should come look at our place,” the woman replied, inviting him to her family’s Fourth of July party later that afternoon. “It’s for sale.”

At the time, Boynton was living in New York City, where, in addition to his soap opera work, he performed in Broadway musicals. “All my friends were buying co-ops in the city, but I wanted to get out,” Boynton said.

When Boynton purchased the farmhouse and barn on Common Road in Waitsfield, he saw an opportunity to combine his love for acting and agricultural edifices in an area that reminded him of his hometown of Damariscotta, Maine.

“My first thought was I could turn the barn into a place for theater and cultural events,” Boynton said.

Boynton is the owner of the now well-known Skinner Barn, which hosts musicals featuring Broadway actors, camps for young children, weddings and many other events each summer.

A classic red, post-and-beam construction, Skinner Barn sits atop a hill along a dirt road with views of green fields and green mountains and everything else considered classic Vermont.

But The Skinner Barn wasn’t always the iconic community center it is now. In fact, when Boynton bought the barn back in the 1980s, it was falling apart. “They said take it down,” Boynton said, “but I wanted someplace I could fix up. I’m very hands-on, and you can’t swing a hammer in Manhattan,” he said, explaining part of the reason for his relocation.

It took six years for Boynton—with guidance from Round Barn owners Jack Simko and Anne Marie DeFreest—to secure the proper permits to convert the barn to a non-agricultural space, and even more time for the actual conversion. “Neighbors would stop by and ask: ‘Peter, are you ever going to finish that barn?’” Boynton said, good-naturedly.

Part of the reason the construction took so long was because Boynton and his brother-in-law, working with local contractors, did most of the work themselves. Every now and then, Boynton’s male friends would come by to help out, and “their wives would make lunch,” Boynton said, remembering the work parties. “It was like an old-fashioned barn raising.”

Although Boynton maintained the look and feel of an old-fashioned barn in his conversion—the clapboards on the front of the building are the same ones with which it was built—he did make some changes to the existing structure, which was built in 1891 and designed for dairy cows, not people. Those changes included adding lines of windows along the walls in the main room as well as installing certain necessities such as stairs and bathrooms.

Today, sparkling string lights adorn the rafters of the barn’s A-framed main room, where a stage is set up for rehearsals of the barn’s upcoming musical, The Mystery of Edwin Drood, which will run for 10 nights in early August.

Although it’s a long haul from the artistic center of New York City, Boynton considers The Skinner Barn his “work of art,” and its walls will provide a space for Valley productions for many years to come.