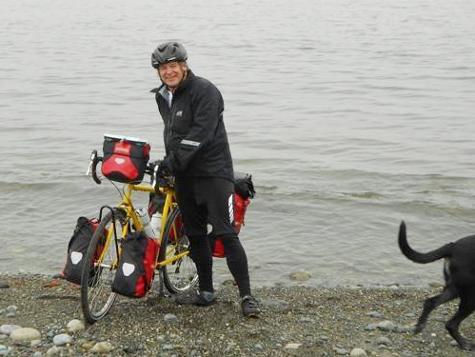 Waitsfield resident Jerry Griffiths is cycling across the country. His trip began on June 4 in Anacortes, Washington, and as of July 1 he’d traveled 851 miles eastward. He hopes to make it to Bar Harbor, Maine, by the end of October.

Along the way, Griffiths will receive support from his wife, Diana, who drove with him out west in their camper, and from his memories of his son, Brendan, who recently passed away at only 28 years old.

Brendan lived in Washington, Griffiths explained, so the western state provided the perfect starting point for his physical and emotional journey. “I needed to experience what he saw that drew and kept him there,” Griffiths said.

Griffiths has since crossed into Montana, but even after leaving his son’s home state, “I will be riding with Brendan in my heart and listening to his lessons along the way,” Griffiths wrote in the first entry of his blog: crazyguyonabike.com/coachjerry.

In his blog, Griffiths posts updates on his daily progress. “Today, I learned how to ride in the rain,” Griffiths wrote on the second day of his trip, as it seems that Washington is perhaps as rainy as everyone says.

Washington is also hilly, and Griffiths’ ride through the Cascade Mountains was not an easy one. “It’s not like I’m climbing steep hills,” Griffith wrote, “just one that never quits, and then if there is a slight downhill, it’s cold.”

Before beginning his trip, Griffiths enjoyed biking but never devoted too much time to the sport. “I was a weekender hoping to do 30 miles a day,” he said. Now, despite sogginess and steepness—and 60 pounds of gear—Griffiths has found that cycling—especially solo—is addictive.

“I become lost in my own thoughts,” Griffiths wrote. “[I] become part of the landscape and just keep turning the pedals.” Griffiths reports riding alongside deer and birds, and even though he is still so early in his journey, he is developing a love for cycling that will give him the strength to continue. On some of his toughest climbs in the Cascades, “there was always a rushing mountain stream for an escort,” Griffiths said, and the top of each mountain pass was “breathtaking….I look forward to not knowing what to look forward to,” he said.

By now, Griffiths has passed into Montana, and you can stay up to date on his adventures through GlacierNational Park—and the rest of the country—on his blog: crazyguyonabike.com/coachjerry. Who knows, maybe he’s not so crazy after all.

Rachel Goff is a staff reporter for The Valley Reporter