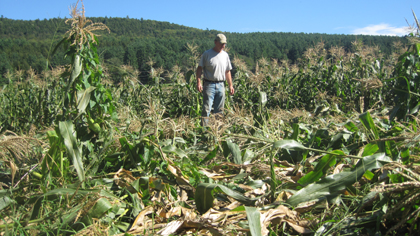 On Thursday, September 6, Mehuron’s Supermarket posted a small cardboard sign above the empty bins next to the tomatoes and garlic. “Corn will be out for about two weeks,” it read.

The corn, which comes from Neill farm on North Road in Waitsfield, is reported by many to be the best sweet corn in The Valley, but, unfortunately, bears have been beating customers to the late-summer staple. 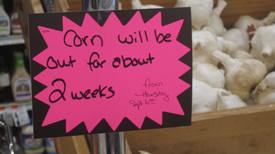 “I haven’t seen the bears, but I’ve seen all the signs in the field,” the farm’s owner, Elwin Neill, said, citing evidence of tracks and scat among his partially flattened crops. Already, Neill estimates that he’s lost about 10 percent of his sweet corn to the bear’s clandestine feasts and, as a result, he’s been unable to keep up with local demand.

One town over, at DeFreest dairy farm in Warren, David DeFreest has been having the same problem. “They come in, they knock it all down and they eat it,” DeFreest said of the recent outbreak of bear activity among his feed corn fields, and outside hunters have already shot five bears on his property this summer.

“Two years ago, it was pretty bad,” DeFreest said, estimating that bears destroyed two acres of his crops in 2010. “But this year, it’s worse.”

Currently, there are about 6,000 bears in Vermont—the largest population since Europeans first settled in the state—and while bears can get all the food they need from the forest, according to the Vermont Fish & Wildlife Department’s website, “They are opportunists.” 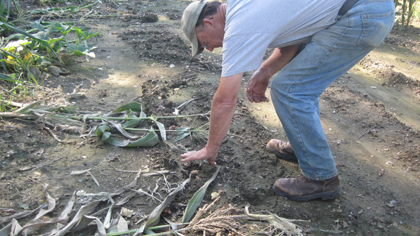 In other words, “They’re going where they can find food,” Neill said. “And they like sweet corn, especially mine.” Both Neill and DeFreest believe that bears have been getting into their crops more this year than last because, due to poor growing conditions, their usual sources of wild fruit and berries are not as plentiful.

“There aren’t any apples for them to eat,” DeFreest said. “Last year, [the problem] wasn’t as bad, because there were tons and tons of apples.”

Farmers can hope for more fruit next fall, but right now the only thing they can do is keep an eye on their property and try to stop any bears before they get too deep into their fields. And Neill hopes to have his corn for sale again at Mehuron’s in another week or so.

That is, “if I can get to it before the bears do,” he said. “They seem to be on a better picking schedule than me.” 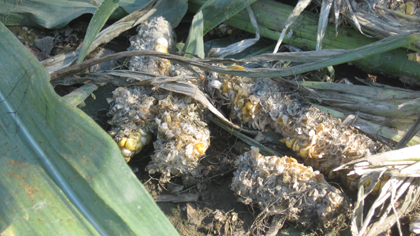