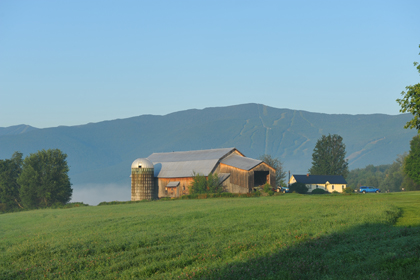 The Vermont Land Trust (VLT) purchased the 48.6-acre farm from Reggie and Dorothy Bragg on August 30. VLT will launch a community fundraising effort to permanently protect the land and the historic barn and has begun the search for an experienced farmer to purchase the farm and contribute to local agriculture in the MadRiverValley. The farm will be the focus of a new farmland conservation effort in the MadRiverValley.

The 48-acre Bragg farm on Bragg Hill Road in Fayston is a scenic icon in The Valley with its large barn, open hay meadows and views of the Green Mountains and Sugarbush Resort. The farm includes extensive frontage on Bragg Hill Road and productive soils which have been farmed continuously for more than 200 years.

VLT purchased the Bragg farm for $760,000 using bridge financing from its Farmland Access Revolving Fund. VLT will resell the farm to a qualified farmer for $175,000, the appraised agricultural value of the land, barn and residence. 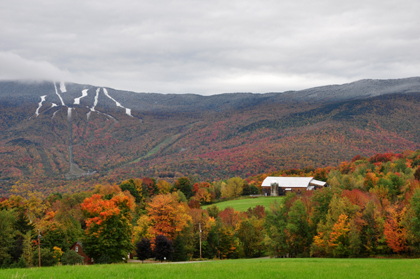 The sale of the farm to the selected buyer will take place once VLT has raised the donations from the local community and grant funds necessary to ensure the permanent protection of the property. The farm will be sold subject to a conservation easement, which will prohibit the future development or subdivision of the land and ensure its long-term affordability to farmers.

The Bragg farm was first purchased by Azro and Anna Bragg in the 1850s and was one of The Valley’s early “hill farms,” which produced a variety of goods including milk, strawberries, raspberries, potatoes, apples and maple syrup.

“From the time I thought about selling, I had hoped I could come back and see it kept open, as a farm,” said Reggie Bragg. We appreciate the land trust doing this.”

“People in The Valley really care about this spectacular land and barn. We are excited to join together with both residents and visitors to The Valley to ensure this beautiful, productive and historically significant farm will forever be a part of our working landscape,” said Liza Walker, MadRiverValley director for the Vermont Land Trust. 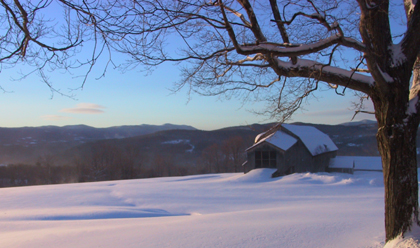 VLT acquired the farm as a part of its Farmland Access Program, which provides farmers with affordable access to farms for commercial operations. These farms are often at risk of development, which could lead to a major loss to communities that value their farms and local food.

“This program has helped a lot of farmers to buy their first farm or to expand their operation,” said Jon Ramsay, director of VLT’s Farmland Access Program. “When we see an opportunity, we step up to buy a farm with bridge financing. In this case, VLT used funding from an anonymous donor and our revolving line of credit to purchase this property. We then use conservation tools that allow us to sell the farm at an affordable value to a farmer.”

VLT is seeking proposals and business plans from qualified, commercial farmers interested in purchasing the Bragg Farm. VLT will host an open house at the farm on Wednesday, September 19, and on Saturday, September 29, from 10 a.m. to 1 p.m. Proposals to purchase the farm are due October 26, 2012.

More information about the Bragg farm and requirements for farm buyers is available at www.vlt.org/bragg or by contacting Jon Ramsay, VLT’s Farmland Access project director at (802) 533-7705.